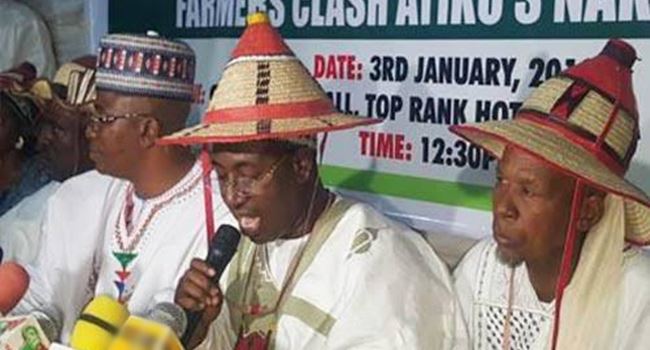 A Fulani group, the Miyetti Allah Kautal Hore Fulani Socio-Cultural Association, has thrown its weight behind the Bauchi State Governor, Bala Mohammed, following his comments that herdsmen carry AK-47 to defend themselves against attacks by cattle rustlers.

National secretary of the group, Saleh Alhassan said in a statement on Thursday in Kaduna State, that Governor Mohammed was the “lone voice among his peers in the North in defence of Fulani herdsmen who are being persecuted across Nigeria.”

“Governor Bala Mohammed has treaded where angels are scared to tread in the past.

“He has taken what every politician will consider as political risk in the past by holding divergent views where others have failed or chickened out.

“So, his current position on the herders/farmers conversation is not strange or out of context.

“Govenor Bala Mohammed has refused to be like Governor of Benue State, H.E. Samuel Ortom, whose only achievement is the raising of ethnic militia and gang leaders that have been visiting mayhem of killings in his state.

“He has not achieved anything tangible apart from his obnoxious anti-open grazing law in the state.

“Ondo State Governor Rotimi Akeredolu will be held accountable for the ongoing genocide against innocent pastoralist and northerners living in the South-West.

“He claims to be a senior lawyer but he has proven to be a disgrace to the legal profession by his actions against Fulani herdsmen in his state in the recent past weeks.

“Akeredolu created the Amotekun Corps to unleash terror on herders and Northerners in the south-western states of Ondo and Oyo.

“The Allah Kautal Hore Fulani Socio-Cultural Association stands with H.E Bala Mohammed since he is the only voice who speaks for the Fulani people and his intervention on the ongoing farmer/herders’ conflict was simply to state the obvious devoid of the current politicisation.”

FAAC disburses N640.3bn to three tiers of govt for January

ANALYSIS: Abductions of school children are here to stay – dissecting complicity of the Federal Govt