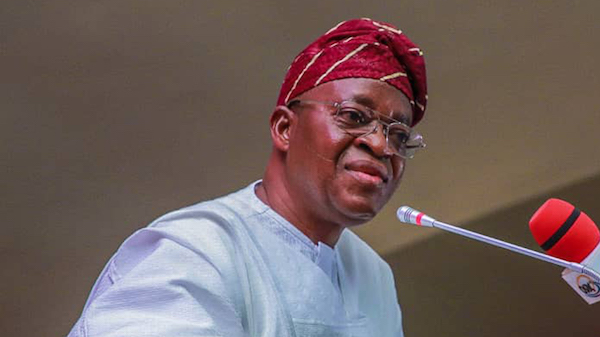 Osun State Governor, Adegboyega Oyetola on Tuesday revealed that he has been able to pay full salaries to civil servants in the state because the state government has stopped wasteful spending of state resources.

Oyetola, who promised to sustain full payment of salaries, said it was not magic that he has being paying in full since he assumed office but by prudent management of available little resources.

The governor stated this in Ikirun at the maiden edition of a civic engagement programme tagged, “Apero” held at Akinorun Grammar School, Ikirun, where he also revealed that his administration is yet to reverse the education policies of his predecessor, Rauf Aregbesola.

According to him, the state executive council would look into the recommendations of the Education Policy Review Committee, which recommended a reversal of some policies introduced by Aregbesola.

He said: “I will continue to pay full salary of workers and God will continue to help us. How we are managing to use the little resources accrued to the state to achieve a lot is not by magic.

“But rather, we manage what comes in by not engaging in a wasteful spending.”

The Commissioner for Information and Civic Orientation, Funke Egbemode, in her speech earlier, explained that the programme was initiated to provide avenue for the government to interact with citizen of the state.