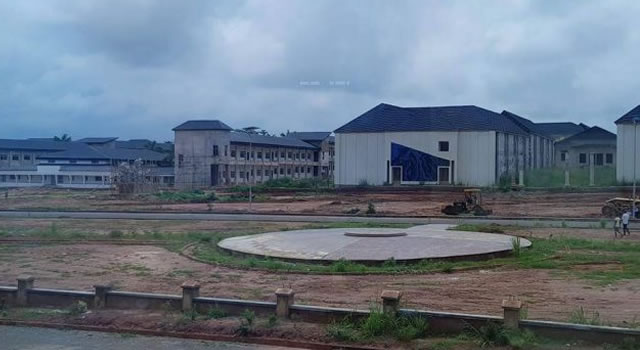 Perhaps, not many saw it coming when on July 31, 2019 the Emeka Ihedioha-led government in Imo State announced that it had taken over the Eastern Palm University, Ogboko, in the Ideato South council area of the State.

In doing so, the administration added that it was going to convert same to a campus housing the faculties of Management and Social Sciences of Imo State University, Owerri.

Addressing the media in Owerri that Wednesday, Jude Njoku, on behalf of the government said that the institution, although recognized by the National Universities Commission as the second State university in Imo, would be downgraded because of lean resources.

Njoku had only told a part of the story.

In a series of undercover investigations in 2018, Ripples Nigeria had discovered massive scandals at the Eastern Palm University. Our findings had noted that the institution was built on corruption and destined to collapse.

First published Feb.21, 2018…Governor Rochas Okorocha’s dream of having a world class university in his home town of Ogboko, in Ideato-South local government area of Imo state, may have materialized with the building of Eastern Palm University.

But questionable managerial skills are now robbing the University of a smooth take-off.

Plans to begin academic activities at the University last November failed to materialize due to the delay by the National Universities Commission (NUC) to give its final nod to courses so far listed for operation.

However, when the nod was finally given, it became apparent that the university may never take off due to management issues which pitched the first Vice Chancellor, Prof. Linus Osuagwu, poached from American University of Nigeria (AUN) in Yola, Adamawa state, against pro-chancellor of the university, Nonye Rajis-Okpara, a former Nigerian envoy to Singapore.

The management disagreements, which included alleged recruitment of top level management staff with questionable academic credentials by the pro-chancellor, were said to have made Prof. Osuagwu quietly walk away.

Sources at the university told Ripples Nigeria that Prof. Osuagwu spirited himself away and only informed Governor Okorocha and the pro-chancellor, of his decision after he had resumed safely at his erstwhile duty post in Yola.

Following Prof. Osuagwu’s move, the university’s director of communication, Lady Cordelia Onu, was also said to have quietly walked away. She too was said to have informed the university management of her decision only after she had reached a safe abode outside Imo state.

Prior to quitting, Prof. Osuagwu was said to have been pitched against Mrs. Rajis-Okpara, over her managerial skills and penchant for full involvement in the day-to-day running of the university.

An inside source disclosed that the ex-envoy, who hailed from Isu area of the state, is said to be closely related to the governor and administers the university like a local government to the exclusion of the Vice Chancellor.

It was gathered that efforts made by Prof. Osuagwu to properly fix the university and get it ready for effective take-off was rebuffed by the pro-chancellor who populated the staff list with persons mostly from political circles, instead of the academia.

According to our source “she sees the university like a local government motor park where every Tom, Dick and Harry from her village who does not have a job must be accommodated even if they have no academic qualification to work in a university environment”.

Though our source acknowledged that Prof. Osuagwu made efforts to put the university on a smooth footing, it was disclosed that the bubble burst for Osuagwu after he stopped an alleged plot by Okorocha, and the pro-chancellor, to have the university recognized by the Joint Admissions and Matriculation Board (JAMB), as a private university.

According to findings, Eastern Palm University was registered at the NUC as the 42nd state-owned university and the 143rd university in Nigeria. However, it was listed by JAMB as a private university.

However, Ripples Nigeria learnt that the university came into being by an act of the Imo State House of Assembly through an establishment law cited as Imo State of Nigeria Law No. 13 of 2016.

Our query indicated that Prof. Osuagwu’s protest forced JAMB to re-order its brochure and list it as state-owned.

Irked by the protest, it was gathered that the pro-chancellor marked out Prof. Osuagwu for antagonisms leading to her single-handed employment of Prof. Dafe Otobo, a retiring professor of industrial relations at the University of Lagos (UNILAG), as alternate Vice-Chancellor.

It was also learnt that Prof. Otobo has been appointed a professor of economics and politics at the university though there are less than 15 students so far registered to begin studies there.

According to our source, the students were housed at a dingy hotel on Obohia junction, just in front of the university as the hostel accommodation is yet to be ready.

It was alleged that the decision to house the early birds in the hotel followed failure of the university management to fix some hostel rooms for co-habitation by the students.

The source claimed that those housed in the hotel included male and female students who had registered for lectures even when they are unsure of lecturers, and that the students are beginning to get agitated about the air of uncertainty over their fate.

Findings show that at the moment, Eastern Palm University is without a functional website. Its official website www.epu.edu.ng has been shut down due to what sources say was “huge debt owed the website developer”.

According to our source, the university administration refused to offset debt owed the web developer and instead, attempted to circumvent him and employ another group to manage the site.

At the moment, only the admission portal www.epuniportal.com where school fees of the university is advertised as N500,000per annum, is functional.

An update on the facebook page of the university made on February 5, 2018 reads: ‘Hi dear people, especially prospective students, this is the owner of phone number 08162713270 signing off. This is also to formally sign off phone numbers 08033036440 and 09033069657 as numbers to call when you need information on Eastern Palm University. Shortly the authorities of EPU will supply numbers to call henceforth. It was good hearing all your sweet voices. Peace.”

No other contact telephone numbers have been advertised by the university management to enable prospective students get in touch with the school.

Following the update, Ripples Nigeria understands that parents have become more skeptical about the prospects of the university ever taking off despite huge sums sunk into building it.

But our source indicated that though the buildings may be great, the university is actually not ready to take off as there may not be facilities to enable such.

“Is university only about walls and glasses? It goes beyond that my brother and we will know when we are ready to take off. As for now, I doubt we are prepared”, our source hinted.

It is feared that the initial hiccups may force the university to abort its admission plans for now.

Meanwhile, there is no official of the university detailed to talk on the development. It is unclear if any official has been appointed to replace the Director of University Communications.

After calling for a revolution, Nigerian govt arrests Omoyele Sowore