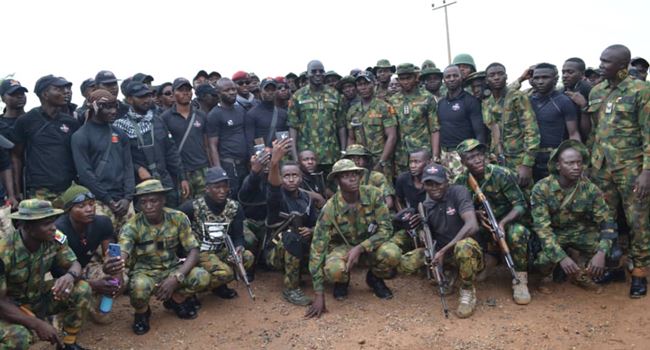 The proscribed Indigenous People of Biafra (IPOB) has mocked the Chief of Army Staff (CoAS), Lt.-Gen. Ibrahim Attahiru, and the Inspector General of Police (IGP), Ibrahim Adamu, over their recent warnings that the military and the police would deal with individuals and groups threatening the corporate existence of the country.

The CoAS had, on Tuesday, at the first Commanding Officers’ Workshop 2021 in Uyo, Akwa Ibom, issued a stern warning to all separatist groups clamouring for secession in the country to desist from such acts or they will be made to face the full weight of the law.

On the other hand, the IGP had also warned the likes of self-styled Yoruba activist, Sunday Igboho who recently declared the Oduduwa Republic, founder of the Niger Delta People Volunteer Force (NDPVF), Mujahid Asari-Dokubo and IPOB leader, Nnamdi Kanu, that the police would not fold its arms and allow them to destabilize the country.

But in a statement issued by IPOB through its Media and Publicity Secretary, Emma Powerful, and made available to Ripples Nigeria, the group said it will not be intimidated by the Army and the police, they are all cowards propagating fake news to discredit IPOB and its security wing, the Eastern Security Network (ESN).

Read also: ESN is a brainchild of South-East governors hijacked by IPOB —Uzodinma

IPOB added that the Nigerian Army and the Police cannot be compared with the ESN in terms of efficiency, training, and personnel and that they are equal to the task of tackling the Nigerian security agencies and coming out on top.

“They can run their mouth for all we care but when the time comes, they will know the stuff ESN is made of. They can threaten any other group, not IPOB and ESN. We are seven miles away from them.

“Nigeria Army and police are cowards, they can’t test us; if they do, they will regret their actions against this outfit.

“The Defence Minister, his Army Chief of Staff and the IGP can brag about what they will do to IPOB, which is a lie. What Boko Haram members are doing to them in the North-East will be a child’s play compared to what they will receive from ESN and its operatives because we are owners of the land.”

Related Topics:ArmyESNipobniger deltapolice
Up Next