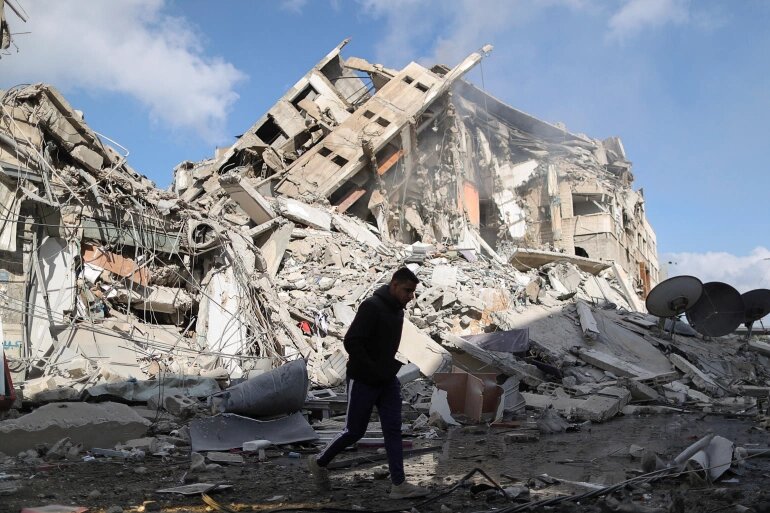 10 members of a Palestinian family, including two women and eight children, have been killed by an Israeli air raid on their home in the Shati refugee camp in the Gaza Strip on Saturday, following another night of relentless bombardment of the besieged enclave.

In the early hours of Sunday, rescue workers were digging through the rubble of the Abu Hatab family home where more people are believed to be buried following the bombardment said to be the worst since the fighting started.

According to the United Nations Relief and Works Agency (UNRWA), Shati is third largest of the Gaza Strip’s eight refugee camps and one of the most crowded and home to more than 85,000 refugees, who all reside in an area of just 0.52 square kilometres.

The head of the family, Mohammed al-Hadidi, narrated how his wife and four sons, Suheib, 14, Yahya, 11, Abdelrahman 8, and Wisam 6, were all killed as they were visiting his wife’s brother to celebrate the Eid-iL-Fitr when the strike occurred.

Another victim, Almeqdad Jameel, a resident of Shati refugee camp, said that at least five missiles were fired from Israeli fighter jets on the house.

“A wall of fire filled the street, and shrapnel and glass flew everywhere, the sound was deafening, and terrified everyone,” he said.

The violence in the occupied West Bank marks the largest number of people killed for years with over 200 people killed so far, including at least 31 children and 20 women.

The Palestinian Red Crescent said Palestinians had been targeted with live ammunition, as well as rubber bullets and teargas.

Israel has continued a bombing operation the government says it is targeting Palestinian militants in Gaza, the Palestinian Health Ministry reported, adding that at least 950 people, including 254 children have sustained injuries as a result of Israeli airstrikes.

A spokesman for the Israel Defense Forces (IDF) said in a statement on Sunday that live ammunition was used after “crowd dispersal means” (referring to tear gas and rubber-coated bullets) had failed to stop the unrest.

The IDF estimated about 5,000 people had been involved in what it called riots across the West Bank, with participants throwing stones and incendiary devices at soldiers and military positions.