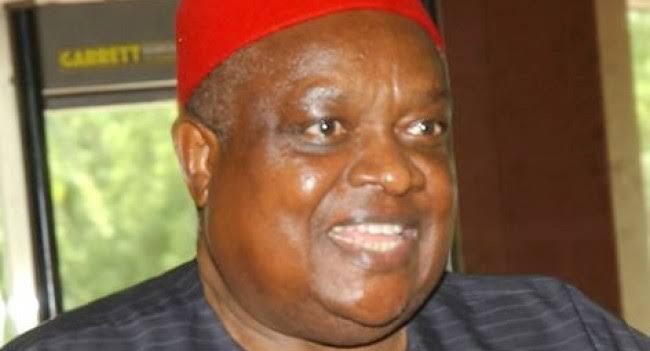 A chieftain of the Peoples Democratic Party (PDP) Chief Emmanuel Iwuanyanwu, has counseled IPOB leader, Nnamdi Kanu to follow the footsteps of the late Biafra leader, Odimegwu Ojukwu, in his clamour for secession (Biafra).

The elder statesman who made the comments on Sunday while speaking when the leadership of the Coalition of South East Youth Leaders (COSEYL) conferred on him the award as its grand patron in Owerri, the Imo State capital, added that before the beginning of the Biafra War in 1967, Ojukwu did not declare secession on his own, but was called upon by all to do so.

According to him, Ndigbo at the moment are not talking about secession but are demanding the restructuring of the country to allow for equity for all Nigerians.

Iwuanyanwu said; “Ojukwu did not ignore elders and he never declared Biafra on his own. It was the people from all walks of life – the academia, businessmen, civil and public servants that called upon him to declare the state of Biafra and become its leader.

“That was why Ojukwu was able to hold Nigeria for three years without rebellion. Most of us who fought the war were intelligent, but we had to join and fight the war. We’re very proud that we fought that war.

“You (Nnamdi Kanu) can’t come on your own and declare Biafra and ask me, Emmanuel Iwuanyanwu, to follow you. Even in a monarchical system, people’s opinions are sought. What do you have that you are declaring war here and there? You are only endangering the lives of your brothers, the youth who you claim to lead. You have to come and seek advice from Igbo elders. They’re the people that will guide you.

READ ALSO: Hausas are Arewas, Yorubas Oduduwas and we are Biafrans – Iwuanyanwu

“All we’re asking for in Nigeria is to restructure Nigeria, which Gowon agreed, but his people rebuked him. Gowon also tried his best to fulfill most of the things that were agreed before the end of the war.”

The politician also added that IPOB members are endangering the lives, investments and properties of Igbos in Igboland and across Nigeria by their unguarded and provocative comments and actions.

“Igbo youths must avoid circumstances that they do not understand. What IPOB did during the #ENDSARS protests was very heinous. Their leader went about taking responsibility for issues and destructions they knew nothing about.

“He also ordered his followers to kill some people in Igboland. If you give orders for another person to be killed in your place, don’t be surprised that your people will be killed also. There is no place in Nigeria that you can’t find an Igbo man. So, ordering the killing of anyone in your community is endangering your people. Apart from the fact that most of our population live outside Igboland, Igbo investment outside Igboland is over $2 trillion,” he said.

Igangan residents give reasons for attack on Fulani settlement