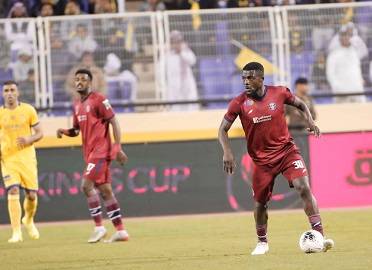 The midfielder, who was with the Super Eagles at the 2019 Africa Cup of Nations (AFCON) in Egypt, had not featured in a football match since June last year.

Ogu had left Israeli side Hapoel Be’er Sheva at the end of last season before joining the national team at AFCON, where he last played against Madagascar in the team’s final group stage match.

The 31-year-old made a return to competitive football in a 0-1 defeat to Al Nassr in the Saudi King Cup on Friday.

“First official game for Football club,” he wrote on Twitter after the match.

“Not the result we wanted but we have to keep working. Feel good to be back on the field after 6 months. Grateful to God Almighty.”

Ogu is expected to make his league debut for Al Adalah when they face Al Ittihad away next Saturday.