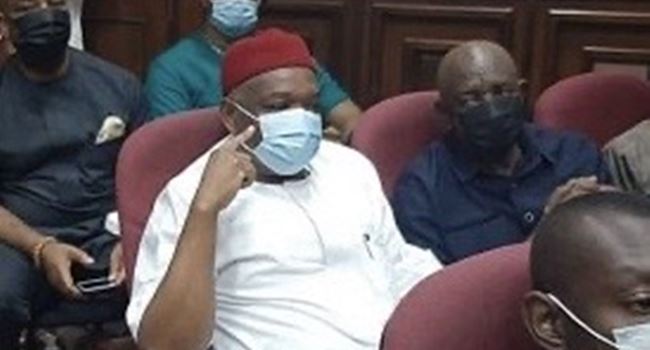 The retrial of the former Governor took a new dimension as the Economic and Financial Crimes Commission (EFCC), filed an application seeking the transfer of the case file from the Abuja division of the Federal High Court to the one in Lagos State.

Kalu, who was Abia State governor from 1999 to 2007, was earlier found guilty by the Federal High Court in Lagos and given a 12-year jail term on December 5, 2019, before the conviction was nullified by the judgment of the Supreme Court and he was released from the Kuje Correctional Center on May 8, 2020.

In delivering the judgment nullifying Kalu’s conviction, the Supreme Court had declared that the entire proceeding that led to his conviction was null and void as the trial judge, Justice Mohammed Idris, was already elevated to the Court of Appeal as at the time he sat and convicted the Senator.

The apex court, therefore, ordered a retrial of the former governor.However, at the resumed trial on Tuesday, counsel for the EFCC, Chile Okoroma, told the court that there was a pending letter before the Chief Judge asking for the transfer of the case to Lagos.

Okoroma explained that the Chief Judge is yet to respond to the letter which was written in line with the judgment of the Supreme Court ordering the prosecution to try Kalu afresh.
Okoroma said the basis for the transfer of the case to Lagos was premised on the fact that the offences allegedly committed by Kalu did not take place in Abuja and that the Supreme Court has held that the case cannot be heard in the FCT.

The judge then adjourned the case till June 7.

Reacting to the application, Kalu’s lawyer insisted that the proper place for the trial of his client should be Umuahia, the Abia State capital, where the offences were allegedly committed.