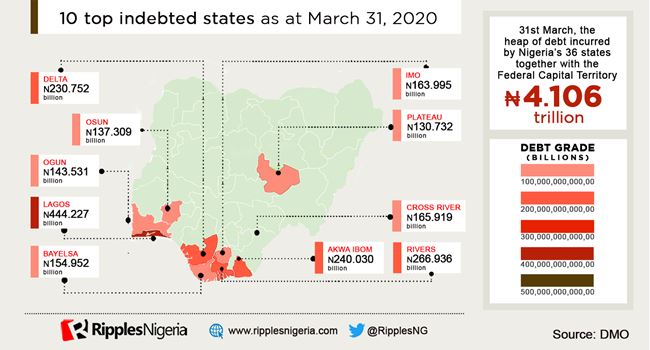 A recent release by the Debt Management Office (DMO) has placed Lagos, Rivers and Akwa Ibom as leading Nigeria’s most indebted states.

The country’s monumental debt burden hardly seems to ease, not only because the nation’s inclination to borrow for virtually every reason has risen with the passage of time, but also because governments have shifted from committing funds to ventures that will deliver huge economic transformation and public benefits.

Experts agree that borrowing is not bad in itself provided it is planned for investments that will yield value and at the same time guarantee the sustainability of the capital injected into them.

But the cost of doing business in Nigeria is simultaneously high as the cost of governance, two factors highly unfavourable for Africa’s biggest economy, where corruption is rife and where the salaries of some political officers outweigh those of their counterparts in most developed economies of the world.

A note from the Debt Management Office on Thursday stated that as of 31st March, the heap of debt incurred by Nigeria’s 36 states together with the Federal Capital Territory came to N4.106 trillion.

Worrisomely, 10 out of the states with a combined heap of debt stood at N2.073 trillion, accounting for more than half of the entire debt stock.

States in Nigeria are mostly at the mercy of the Federal arm of government, which they rely on for fiscal support through monthly allocations.

Internally Generated Revenues of states are meagre at the best of times with only a few of them having the capacity to depend on these without allocations from the centre.

At this time of economic downturn when the coronavirus crisis is depleting oil revenue, crippling commercial activities, slowing economic growth and disrupting the supply chain, Nigerian states may struggle hard to withstand a fiscal challenge much graver than that of the oil crash of 2016-2017.

Sectors like aviation, which saw a revenue slump of $2.09 billion in the months of April and June, oil and gas as well as manufacturing are particularly vulnerable.

With an entire debt portfolio of N28.628 trillion the Nigerian government has declared its ambition to borrow more from some multilateral lenders, and through bond offering to fund its spending plans for 2020.

Mention has constantly been made about the need for the Nigerian government to cut spending, create fiscal buffers, broaden income sources and diversify the economy.

Yet, states need to take a cue from these recommendations and strive to develop their local economies, which could serve as their primary source of revenue which allocations from the centre should complement.

Beyond this, however, is the greater need to deal with the issue of unbridled tampering with state resources by government officials. How well Nigeria’s most indebted states are able to ride the COVID-19 storm may ultimately depend on how they curtail corruption, cut down wastes, optimize meager resources and checkmate the excesses of thieving officials.

With the country’s economic condition escalating at a swift rate, there is no avoiding the urgency to invest the greater part of government’s income on infrastructural development and industrial expansion.