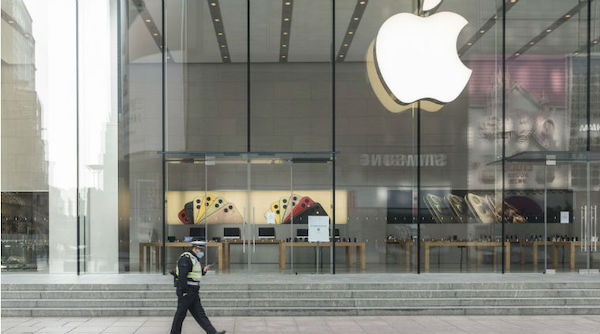 American leading software and hardware company Apple, on Wednesday, crossed a major milestone, becoming the first American company to hit $2 trillion market capitalisation. According to media reports, the tech giant first breached $1 trillion in August 2018 and doubled in value in just over a year. Apple, speaking on the development, noted that huge boost in growth came only in the past few months as the coronavirus pandemic ravaged other parts of the U.S. economy.

Analysts have described the massive valuation as the latest boost to the tech world’s market share. According to speculations, the largest tech giants, also including Amazon, Google and Facebook, have seen astonishing growth amid the pandemic. Meanwhile, Apple’s historic market cap comes at a time when the company is under scrutiny for antitrust practices, specifically when it comes to the App Store. The tech giant is currently the focus of federal investigations, and Tim Cook, Apple’s CEO had to testify in a Big Tech antitrust hearing last month as part of the ongoing investigations.

Three Tanzanians have emerged as winners of the 2020 Digital Accelerator Program, a contest that took judges an 11-month vetting process. The program, which was organised by Vodacom, was established by the company and Smart Codes, with the aim to assist early-stage growth tech startups to become revenue-generating businesses. While Vodacom operates as a telecommunications company, Smart Lab is an innovation platform that links learning institutions with corporate partners to empower groundbreaking solutions that will impact African communities.

Press revealed that the contest received over 600 applicants from various sectors including agriculture, fintech, media, health, education, and e-commerce. Although the program has gained traction since its launch in 2019, the new pool of interest in tech on the global scene has pushed the initiative to broader spectrum. Vodacom, represented by Nguvu Kamando, director of Vodacome’s Digital and Value Added Services while speaking on the modalities, expressed excitement on the turn of event. “We have been impressed and awed by all the start-ups that were selected for this maiden accelerator program, they all had great ideas in using digital technology to change the way we do business but also solve issues of development,” he said.

A. Google
B. Wikipedia
C. Samsung
D. Facebook
E. None of the above

Just on the eve to launch a new lunar data platform, ispace, private moon lander company has, on Thursday, announced raising a $28 million Series B funding round. According to the board of directors, the new raiser is expected to help the Japanese company continue to develop its commercial lander ahead of planned 2022 and 2023 launches. Alongside the investment, the Japanese startup is also announcing a new data platform business that will leverage the lunar data it will collect to provide other companies, space agencies, research organizations.

READ ALSO: LATEST TECH NEWS: Facebook to phase out Oculus accounts. 4 other things and a trivia you need to know today, August 19, 2020

Meanwhile, it is expected that the company will provide insights to organisation on an informed basis for planning their own Moon missions and eventual lunar commercial developments. Speaking on the raiser, ispace noted that the $28 million Series B was led by IF SPV 1st Investment Partnership (through Incubate Fund), and includes funding by Space Frontier Fund (a fund whose LPs include Toyota, Mizuho Bank and more), Takasago Thermal Engineering Co and Mitsui Sumitomo, brings the startup’s total funding to date to $125 million.

One year old Mauritian tech startup Bongéni has launched an online platform where individuals and businesses seeking to move goods can leverage fleet of independent drivers. According to press, Bongéni, which was formed in August 2019, only rolled out its service in June of this year, offering an Uber-style transportation marketplace dedicated exclusively to apartment moving and delivery of goods, using all types of vehicles.

Director Philipp Demidoff, in a statement, noted that Bongéni was initially B2B-oriented, but is using its mobile apps to cover the delivery and shipping needs of individuals as well. He said: “We were positively surprised by the diversity of platform use. People are ordering everything: from lunch and flower delivery to apartment and furniture moving.” He added that Bongéni was launched in response to its team’s deep-felt belief in the future of the sharing economy.

To play in a market dominated by Uber, a new startup, Taxi Live Africa has launched in South Africa. The new startup, following its launch, has become the first e-hailing service to recognises drivers as potential shareholders. According to reports, Taxi Live is offering 40% of their profit share to their drivers, very much unlike Uber and other leading competitors. Speaking on their U.S.P., Luvuyo Ntshayi, founder of Taxi Live Africa provided insight into why the startup has implemented the opportunity for drivers to become shareholders.

He said: “We believe in socialism and creating real entrepreneurs in our society.” In a bid to start strong, and in addition to offering this opportunity to its drivers and promoting entrepreneurship, Taxi Live Africa has reported that it offers a better commission rate for its drivers. Speaking on this, the startup further noted that drivers will only pay 15% in commission per ride allowing them to earn more for their services compared to other apps. Although, reviewers have praised the new business venture, but markets analysts thinks it’s too early to draw remarks, especially for a business operating in a volatile space as transportation.

The world’s most translated website isn’t owned by one of the large tech brands, such as Google, Apple, Microsoft or Samsung. It is, in fact, the website for the Jehovah’s Witnesses (https://www.jw.org/en/).

The website has been translated into more than 1010 world languages and dialects, and the translations of this website’s publications are carried out spontaneously so that it reaches users in the right language, as quickly as possible. Others on the list include: Wikipedia in about 287 languages, Samsung in 166 languages, Google in 164 languages, Apple in 125 languages, and Facebook in 97 languages.