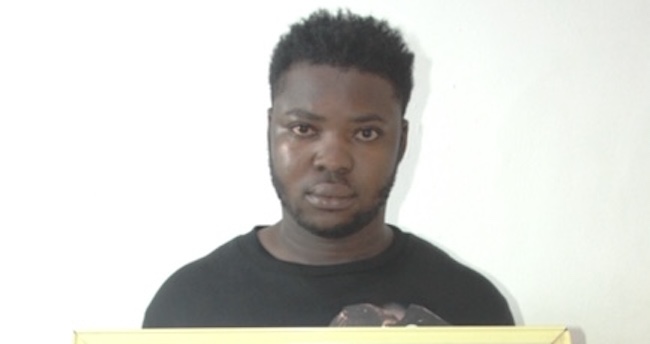 The Lagos Zonal Office of the Economic and Financial Crimes Commission (EFCC) has arrested one Adeshina Lukman for an alleged case of obtaining money by false pretence and stealing to the tune of $10,000.

Adeshina was arrested on April 14, 2021 in the Ipaja/Ayobo area of Lagos, following a complaint received by the Commission from one Isa Abdulhamid Mohammed.

According to a statement by Wilson Uwujaren, EFCC head of media and publicity, Mohammed, in his petition, alleged that one Bashir Haruna Isa, a Bureau De Change operator, sometime in March 2020, approached him with an offer to sell $10,000, while he (Mohammed) would pay the Naira equivalent of the Dollars to him.

He further alleged that when Isa requested a Dollar account where the money would be paid into, he was provided with a Wells Fargo Bank account number 4861511475.

According to him, upon receipt of the money paid by one Thomas Joyner in the United States of America into the Dollar account, he made a transfer of N3.5 million being the Naira equivalent of the Dollars into Isa’s account in a new generation bank.

He, however, said that the said sum of $10,000 was reversed from the Wells Fargo account by the bank on the grounds that the transaction was unauthorised and fraudulent.

Uwujaren revealed that Investigations revealed that Isa allegedly made those transactions on behalf of the suspect, who confessed to being involved in scamming unsuspecting victims and defrauding them of huge sums of money.

Isa further claimed that he had approached the complainant based on a call he received from one Muttaka Idris to help him provide an account details in the USA, where Dollars could be paid into.

Idris, when apprehended by the EFCC, also claimed that when he received the Wells Fargo account details, he gave it to one Jamil Na-Allah, who had called to also ask him for it.

In his statement, Na-Allah, also a BDC operator, revealed that he got a call from the suspect, who informed him that he wanted to sell $10,000 and asked for a US account, where the money would be paid into.

Na-Allah further claimed that, upon the payment of the money into the account, the sum of N3 million was paid into his (Na-Allah) account, out of which he transferred the sum of N2.73million into the suspect’s account after he had taken his share and that of Idris from it.

He also claimed that all efforts to retrieve the money from the suspect, after he had been informed that the money was reversed from the bank, proved abortive.

Uwujaren further noted, that the suspects will soon be charged to court.