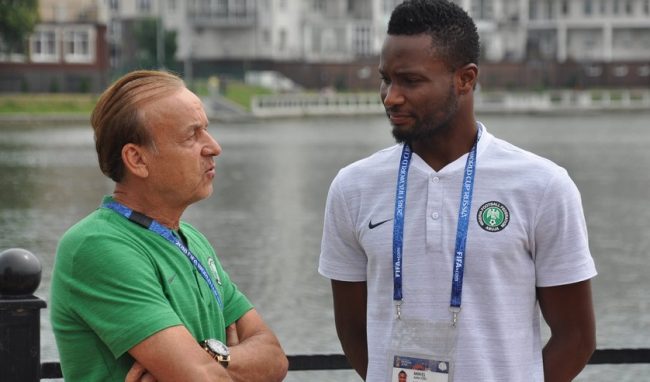 Super Eagles coach, Gernot Rohr has given reasons why the team’s captain, John Mikel Obi, who has been away since the 2018 FIFA World Cup, cannot join the team at the moment.

Mikel joined English Championship side, Middlesbrough, in January, and has been instrumental in the team’s race for promotion to the Premier League.

The Eagles are set to play against the Pirates of Seychelle with a stand-in captain, Ahmed Musa, in a dead-rubber Africa Cup of Nations (AFCON) qualifier at the Stephen Keshi International Stadium, Asaba on Friday.

Rohr, in his pre-match conference on Thursday, explained that Mikel was still nursing a knee injury, and with the the key matches he has to play at his club, it is not the right time to return to the national team.

“Obi Mikel is playing well at Middlesbrough and he is doing well now, but there is still a little problem with his knee and it is not the moment for him to come back to the team in these conditions,” Rohr said.

“There are so many games for him to play for Middlesbrough. They are fighting for a promotional playoff spot. And he told me it’s not the right time to return.

“But if Obi Mikel is very fit and has the motivation, if he shows that he is better than the other people we have, the door is open

“I’m not like Joachim Low (the German coach) who announced that three players are out of the German national team because you never know what might happen. There could be injury or loss of form.

“We are watching what is happening and we hope he (Mikel) can come back one day because we need experience. We now have more young players than the last list.”

Nigeria already qualified for the 2019 AFCON billed to hold between June and July and hosted by Egypt.

Mikel, who was a member of the suad that lifted the title in 2003, may likely captain the current squad to Egypt if he returns for the tournament.

The Super Eagles will take on Seychelles today (Friday) by 4:00p.m, and also battle the Pharaohs of Egypt in an international friendly next Tuesday at the same Asaba venue.