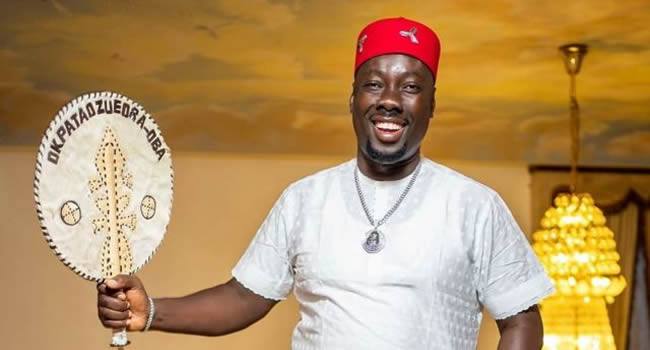 Some decades ago as a teenager a village brother based in Lagos had taken me to the late Victor Okafor’s birthday bash somewhere in Ihiala, Anambra state, during Yuletide. Victor Okafor (may his generous soul rest in peace!) was the popular ‘Eze-ego’ who used his wealth to develop his village in Ihiala — tarring roads, fixing street lights and constructing houses for the poor and borehole for the community. The birthday was an annual feast featuring the rich and powerful from afar and near. In that year’s edition under reference it was a rich colourful all-night party featuring live bands (Oliver De Coque, King Sunny Ade, Shina Peters etc). There were so much fun to remember for, so much to eat and drink that everyone must have gone home at dawn down and satisfied.

The late handsome ‘Eze-ego’ (king of money) was then one of the youngest and richest men from his community. And he displayed his wealth without complex touching lives and making himself heard loud and clear. He built an edifice befitting his status and made friends across ethnic lines. During the Xmas season he distributed bags of rice, goats, groundnut oil, money to the needy. And donated soccer cup and played football in the village with the youths.

As we watched great musicians entertaining the mammoth crowd, wining and dining happily, I was struck by the display of opulence that I had wished silently that I became rich and powerful too! Money ‘rained’ all night long speaking every language you could think of as it were. Dollars, Pounds, Naira flew in different directions as friends and associates threw wads of local and foreign currencies on the late business mogul based in Lagos as he danced with his beautiful wife, Nkechi.

Some intervening years later Okafor was involved in a minor auto accident on his way to the village a day or two to Christmas, few kilometres to Ihiala, and he died instantly! Every other person inside the car including his wife and children survived the accident. Then rumours began making the rounds that Victor could have been killed by an evil spirit (agbara) after failing to honour summons from the fetish dark kingdom. According to one of the theories being propounded then someone he ‘ate’ his money must have taken his complaint to the evil shrine.

Another theory was that his wealth was as a result of an evil pact with Lucifer or involvement with ritualism or cultism. No one knew the truth for sure but the late Okafor is still remembered today in Ihiala for his great impact on the lives of the local folks.

Recently in Oba, a sleepy town in Idemili North Local Government Area of Anambra State, dozens of kilometres from Ihiala, a mother of all burials took place. Obinna Iyiegbu, alias Obi Cubana, held the funeral of his mother who died late last year at a ripe old age. For days running the great event trended globally online. I watched the videos and came out with the impression that money spoke powerfully during the week-long fiesta.

Politicians, entertainers (Nollywood greats), businessmen, social media influencers, ordinary and extra-ordinary folks thronged Oba to commiserate with Cubana as he sent his mother six feet below with a golden casket valued at millions of Naira. Indeed it was a colourful rich occasion featuring the mundane, the obscene and the wierd, all embedded in debauchery.

How an otherwise melancholic occasion was effortlessly transformed into a carnival fraught with obscenity beat the imagination of the serious-minded observers.

Money was used and abused at will as people competed for space to be seen or for whom would throw more money towards Cubana in appreciation of his much-vaunted munificence or naked demonstration of belonging to the rich elitist club.

In one of the obscene videos ladies (some showing off their professionalism as whores) scrambled for cash at the pool side, skimpily-dressed, as money was thrown inside the swimming pool! Some of them must have swun themselves to riches!

Obi Cubana had jetted off reportedly to the Maldives Island for a deserved rest after the moneyed party dressed as a funeral. But before he left our shores the young man (46) had defended his legitimate source of wealth telling whoever cared to listen that his sudden rise to opulent fame was through the dint of hardwork. After his graduation from the University of Nigeria, Nsukka, Cubana did his NYSC youth service in Abuja and from there he laboured his way to the entrepreneurial top. He invested heavily in hotels and night clubs!

Before I stumbled on his profile I had dismissed him wrongly as one of those ‘money-miss-road’ young Igbo millionaires out to prove their ignorance before a global audience. Undoubtedly many of these ignorant elements abound in Igboland! They believe in two things which they consider utterly significant in life: making money, marriage and making babies. They value neither God nor rules and regulations! For them a good house, car and wife and millions or billions in the bank accounts are enough to guarantee ‘paradise’ here on earth.

READ ALSO: Obi Cubana explains how he became a millionaire

Lately criticisms had trailed the money show in Oba. Some of the critics were interrogating the profile of some of the guests that came and displayed their status of millionaires or billionaires. Others were asking about the source of wealth of not only the Cubana of a man but those that ‘rained’ bundles of freshly-minted legal tenders on the celebrated celebrant. And others (admirers if you like) were busy demanding a cut of the ‘soap’; that is, how and where they could make money through ritualism or cultism!

You have these critics too who were of the opinion that instead of the Cubana rich club exhibiting their new-found riches in a supposedly sombre occasion they could have used their wealth to construct hospitals, roads, schools or better still, given scholarships to the indigent children that abound in the town. Perhaps, Cubana is doing these charities but more are required.

Well, how anyone makes their money or how they spend same is none of our business. Suffice to say however that the Oba show ‘shaming’ money or poverty bore a hallmark of misplaced priorities. Obi Cubana may be generous in his dealings with his people but there are many social challenges in his village and town awaiting his attention. Intervening and making things better or life more bearable for the rural folks ought to be his primary preoccupation.

Promoting obscenity or get-rich-quick syndrome attitude may not be a source of role model for the restless youths in his town or elsewhere. And now that some misguided youths are bombarding stars and celebrities with probing questions on how to get rich by hook or by crook (cutting the soap or whatever it is called) brother Obi Cubana and his rich friends must provide satisfactory answers to their worries and troubles.

Related Topics:Obi Cubana
Up Next

OPINION: The Commissioner went to jail