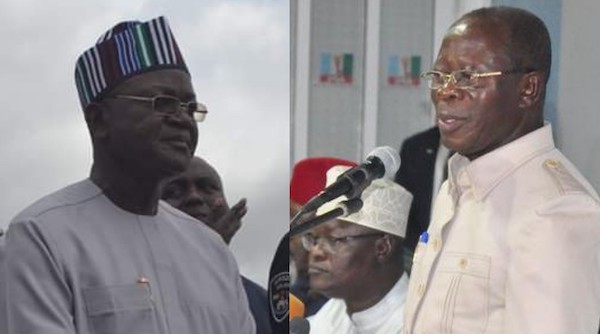 The Benue State governor, Samuel Ortom, on Thursday asked the State High Court, Makurdi, to fix a date for hearing of the N100billion suit he filed against the ex-National Chairman of the All Progressives Congress (APC), Adams Oshiomhole, for alleged defamation.

The development means that the out-court settlement canvassed by the ex-Edo State governor in a bid to resolve the dispute has collapsed.

Ortom had filed the suit against Oshiomhole after he alleged that the Benue State governor had a hand in the death of two Catholic priests and other parishioners at Mbalom Community, Gwer East local government area of the state.

One of the priests, according to reports, had delivered a “very critical sermon” against Ortom.

The ex- APC chief had on October 13 last year sought for an out-of-court settlement with the governor and this was communicated to the court.

Justice Augustine Ityonyiman consequently adjourned the case to October 29, 2020, for a report on the out-of-court settlement.

But the hearing on the matter was adjourned again by the judge.

However, when the case resumed on Thursday for report on the out of court settlement canvassed by Oshiomhole, Ladi Achibong, who held the brief for Ortom’s counsel, Samuel Irabor, told the court that the out-of-court settlement had failed.

She said: “I have the express instruction of Mr. Irabor to ask the court to fix a date for the definite hearing of the N10billion libel suit against Oshiomhole and the APC.”

But Mr. Titus Akuha, who held the brief for the ex-APC chief’s counsel, Festus Jumbo, insisted that all the terms of settlement except one pending issue had been met.