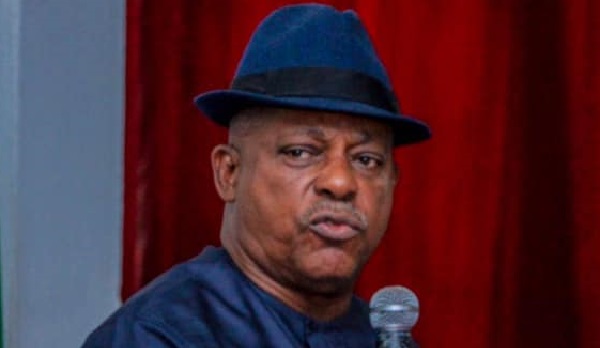 A group of stakeholders in the Peoples Democratic Party (PDP), ‘The PDP Frontliners,’ has insisted on the immediate removal of the embattled National Chairman of the party, Prince Uche Secondus, alleging that he intends to perpetuate himself in office.

While addressing newsmen at a press conference in Kaduna on Monday, the group said the significance of a national political party such as the PDP far surpasses any individual’s agenda to perpetuate himself in office.

The PDP Frontliners said in spite of an alleged below-average performance by Secondus, “he is much eager to remain in office rather than allow vibrant changes that would prepare the party for electoral victory in 2023.”

The press conference which had in attendance the PDP Frontliners President, Alhaji Hussein Mohammed, Secretary General, Moses Abidemi and the Publicity Secretary, Dan Okafor, said “rather than stem the membership haemorrhage leaching the PDP in favour of the ruling APC, Secondus chooses to preside over a situation of growing anarchy that may hinder PDP’s reconciliation process and rob the party of great chances in 2023.”

The group added that “instead of being allowed to sit pretty over an imagined fiefdom, Secondus who ought to have gone a long time, must go now.”

“He has never proven to have any capacity for being a political war general and his laissez-faire style of leadership during preparations for the 2023 general elections can only culminate into really atrocious results.

“We appreciate his past contributions towards building PDP but in the face of current realities, Mr Secondus needs to rethink his insistence about continued leadership of PDP; he should also consider public repudiation of alleged moves to lobby some party leaders for an extension of his tenure.”

Mohammed said the PDP Frontliners is a mass group of concerned party supporters who are determined to seek a vibrant, tactical and visionary leadership in PDP towards putting an end to the pain, miseries and colossal disappointment that APC foisted on Nigeria in spite of massive propaganda and utopian promises made in 2015.

“We feel particularly pained that except for occasional press statements from the PDP’s National Publicity Secretary, Mr Secondus’ leadership has not taken real advantages of the ruling APC’ s glaring errors and inadequacies towards enabling PDP to gain traction in the consciousness of ordinary citizens; the man is evidently not a war-time general, his leadership is too cold and aloof to the prospects of vigorous politicking that we need for the 2023 elections.

“Even as we speak, notwithstanding the exit of several federal legislators, governors and even a member of the PDP Board of Trustees, more groups are contemplating leaving PDP if the relatively unimpactful Secondus leadership continues for the next one month.

“With the loss of both 2015 and 2019 national elections, fewer PDP members in the National Assembly than we had in 2015 as well as a hellacious gale of defections, it would be a most honourable sacrifice for Mr Uche Secondus to leave office now and thereby help foster better reconciliation processes; give hope to those who wish to join the PDP and inject vibrancy into our preparations to improve our party’s chances in the forthcoming elections.

“Secondus ought to have gone yesterday, it is up to the PDP Board of Trustees, the PDP Governors’ Forum and the PDP Caicases in both Chambers of the National Assembly to do the needful; Secondus must please go now.”

Plateau Gov, Lalong may run for president in 2023