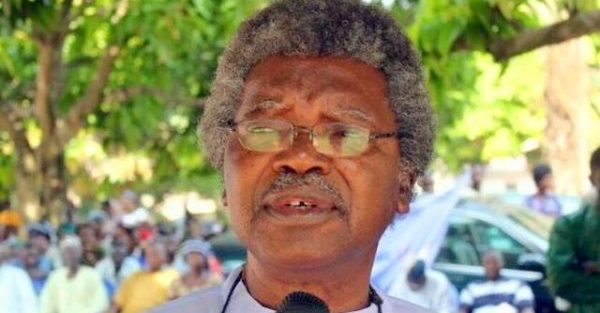 Former leader of the Northern Elders Forum (NEF), Paul Unongo has said that many Nigerians are worried that what they see now does not look like the President Muhammadu Buhari they know.

The self-acclaimed Spiritual Leader of the Tiv nation stated this on Thursday when he spoke on a Channels TV programme, Sunrise Daily, adding that he cannot explain why people are having such feelings about President Buhari.

Unongo was responding to questions bothering on former President Olusegun Obasanjo’s recent letter to Buhari when he made the statement.

He said, “I tend not to agree with him (Obasanjo) wholesome, but I know both persons and I have interacted with both persons fairly closely. Although, people are saying Obasanjo is playing politics, but it’s good politics and it defines him.

“If you look back into recent history, he did similar thing in the cases of Yar’Adua and Jonathan and he’s doing same to his fellow comrade in arm. I think Obasanjo is being Obasanjo. He’s truthful in the pursuit of what he believes in what is the best interest of Nigeria.

“I think people should not react to his letter emotionally because he participated in bringing Buhari on board. I felt the letter was an opportunity for the Federal Government to explain some of the strange things that are happening in Nigeria. I know Buhari and I worked very hard to bring him into power.

“We saw him with Idiagbon and he made decisions that were very patriotic and implemented them right away.

“Obasanjo decided to cry out because Buhari seems to have being shortchanged by some people managing him. The letter seems to be a wakeup call for him to sit up.

“I think friends of Mr. President, including me, should be bold enough to tell him that something is getting wrong. And Obasanjo went straight and say, if this has anything to do with your health don’t present yourself to election come 2019.

“If I were Obasanjo, I wouldn’t go that far. He (Buhari) has not presented himself yet (for re-election). If it were an advice to be taken, it could have been given privately because he (Obasanjo) has direct access to Mr. President.

“But I think a lot of people are worried that what they are seeing now does not look like the person they know. It’s something we cannot explain except we juxtapose the illness, that he was really sick and that the illness affected him, which led to, in my judgment, the sort of suggestion Obasanjo had made.

“I would have said let’s wait, if he indicates to ask some of his friends that he is going to context again, I think that that suggestion of Obasanjo is relevant, we should discuss it.”

READ ALSO: Obasanjo has been too busy to notice Buhari’s achievements —FG

On possible replacement for Buhari from the North, Unongo said that there are over a thousand politicians who can replace Buhari. He listed former governor of Kano State, Rabiu Kwankwaso, erstwhile Vice President Atiku Abubakar, Borno State Governor Kashim Shettima and some others as his possible replacement.

The elder statesman however warned that should 2019 presidential election be narrowed down to Buhari and Atiku, who had already indicated interest, that the incumbent president will emerge winner.

“There are over a thousand credible persons who can lead Nigeria from the North.

“Former governor of Kano, Rabiu Kwankwaso, people are even saying Shettima should be given a chance because of the way he handled the Boko Haram case in Borno. And of course, former Vice President, Atiku Abubakar, has already indicated interest but from my observation, if you narrow down the election to Atiku and Buhari, latter would still win.”

Saraki says contrary to beliefs, NASS is short of funds