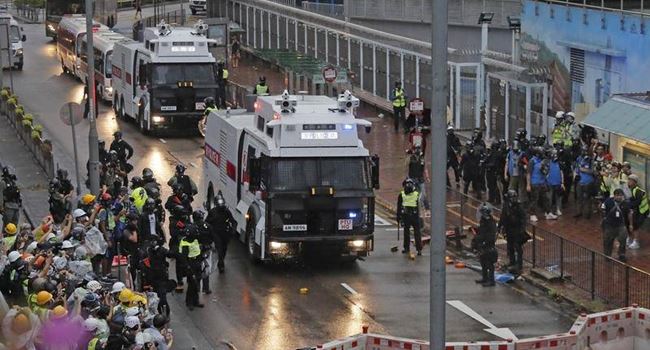 Pro-democracy protesters had a tough time facing riot police on Sunday in a fresh round of violent protests that rocked the semi-autonomous city of Hong Kong.

Reports say police used water cannon for the first time and at least one officer fired his sidearm during pitched battles with protesters in scenes described as one of the most violent nights in three months of pro-democracy rallies that have rocked the city.

As much as 29 demonstrators were arrested as wild protests continued overnight with more clashes that saw authorities use tear gas to disperse the crowd.

Reacting to an instance where several police officers drew their sidearms, a senior police chief said it was only one policeman that drew his fire arm.

“According to my understanding, just now a gunshot was fired by a colleague,” Superintendent Leung Kwok Win told the press on Sunday.

“My initial understanding was that it was a uniformed policeman who fired his gun,” Win added.