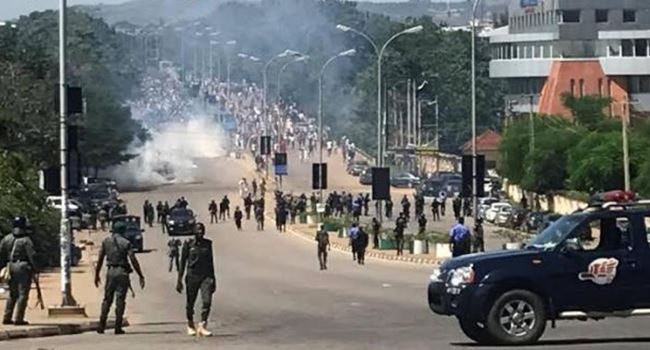 Operatives of the Nigeria Police on Saturday shot teargas canisters at June 12 protesters in Gudu area of the Federal Capital Territory, Abuja.

The protesters who had gathered at a point to air their grievances over the state of the nation took to their heels as the policemen fired the tear gas at them.

The operatives reportedly from the FCT Police Command, stormed the area and put a stop to the protest which had which had began around 08:30 am and had been going on smoothly, as the protesters, who were mostly youths expressed their dissatisfaction with the state of the nation.

It was gathered that the protesters, who were chanting “Buhari must go” and “Say no to injustice”, took to their heels and scampered for safety when the security operatives started shooting.

Also, Ripples Nigeria learnt that the protesters had earlier blocked the Gudu Junction, while the Unity Fountain in Abuja, which is a popular venue for protests in the nation’s capital, had few protesters as of 8:15 am.

However, at the Millennium Park just opposite the fountain, a few individuals wearing branded T-shirts with the inscription ‘I Stand With Buhari’ also gathered and later embark on a road walk to mark Democracy Day.

It was gathered that the protesters in Gudu turned out in their numbers and carried placards and banners with various inscriptions, which among their demands was the resignation of President Muhammadu Buhari from office.

According to the protesters, the President has failed in addressing the challenges in the country, including that of insecurity.

Meanwhile, among those leading the protest were social activists Omoyele Sowore and Deji Adeyanju.

However, as the protesters continued their protest, heavily armed policemen stormed the scene and began shooting tear gas into the air to thwart the protest.

Related Topics:BuhariDemocracy DayJune 12protesters
Up Next