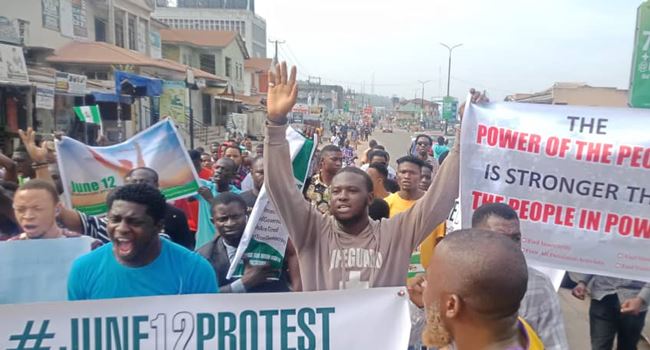 The Ondo State Capital, Akure on Saturday was a beehive of activities as youths in their hundreds trooped out to protest the Presidency’s alleged support for open grazing.

Ripples Nigeria gathered that this was despite an appeal by the Deji of Akure, Oba Aladetoyinbo Aladelusi, to youths in the capital city not to embark on the protest.

The youths, who conducted themselves in a peaceful manner, walked through Oja Oba through Oba Adesida Road displaying placards with different inscriptions including ‘Kick Against Open Grazing’ and others.

In Osogbo, there was complete shutdown of economic activities as the Coalition of civil society in the state embarked on a massive rally in protest against insecurity and unemployment in Nigeria.

The groups flashed placards which read: ‘Return my Twitter’; ‘Nigerian youths are not lazy’, ‘Buhari must go’; ‘Resign if you are tired’ – ‘Buhari; Restructure Nigeria Now’; among others.

The groups gathered at Oke-Fia in Osogbo around 8am on Saturday.

However, there was heavy security presence at the venue of the protest.

Read also: Why I shifted Democracy Day to June 12 —Buhari

Men of the DSS, Police, JTF, Amotekun and other local operatives were present at the venue.

In the centre of excellence, Lagos, the police dispatched armed units of the Rapid Response Squad to the Gani Fawehinmi Park in Ojota, venue of the June 12 protest in Lagos State.

This is in order to nip the protest and any potential breakdown in law and order in the bud.

About three Hilux Vehicles and two armoured tanks were seen at the venue on Saturday.

Currently, no protesters have been sighted with journalists on the ground to monitor proceedings.

Related Topics:#featuredAmotekunJune 12 protests
Up Next