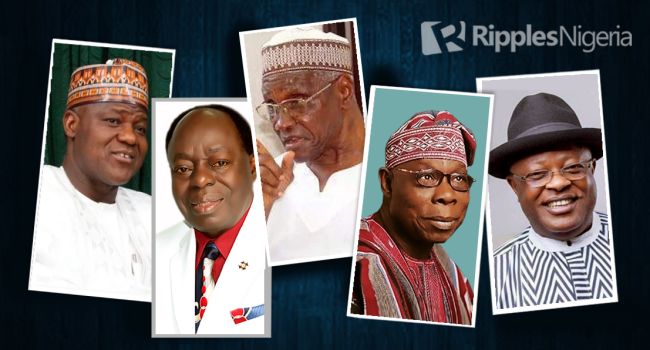 This and four other stories we tracked dominated the news headlines last week.

The lawyer, who made the call at a media briefing in Ado-Ekiti, on April 18, also demanded the suspension of the 2023 general elections until Nigeria has a new constitution with the provision for part-time legislators and a non-executive president.

Babalola said: “The same Constitution has made politics become not only very attractive, but the only lucrative business in Nigeria today.

“What this means is that any election that holds under the present scenario will end up producing transactional and recycled leaders, with no ability to turn things around.”

The senior lawyer’s demand for an interim national government suggests a nation in a serious crisis and on the verge of collapse.

Although Babalola strikes the right cord in his identification of the challenges facing the country, Nigeria’s constitution does not have a provision for an interregnum and, therefore, such call is more or less an invitation to anarchy.

An interim government, in most cases a contraption, is created under diverse circumstances, including the collapse of the government, negotiated agreement, special election, or international intervention and none of such scenarios exists in the country presently.

Could Chief Afe Babalola be flying a kite? Only time will tell.

The ex-President, who made the call during a meeting with the leadership of the National Association of Ex-local Government Chairmen in Nigeria in Abeokuta, stressed that Nigeria was in dire need of genuine solutions to its numerous challenges.

Obasanjo’s remarks reinforce the call for a new approach to the country’s security challenges. And, closely related to that is the unfinished conversation around a restructuring of the country which demands an honest dialogue between and among its various entities.

Such an arrangement will not only redefine the workings of the perceived faulty structures but also relieve the burden on the overstretched federal police in favour of a state policing system that can quickly detect and uproot any emerging crime before it grows.

The only fear expressed by many is the existence of two rivaling institutions with the same duties and responsibilities in the country and the attendant consequences.

The Northern elders on April 22 endorsed the former Senate President, Bukola Saraki and Bauchi State Governor, Bala Mohammed, as the region’s consensus candidates ahead of the Peoples Democratic Party (PDP) presidential primary slated for next month.

A former Vice-Chancellor of the Ahmadu Bello University, Prof. Ango Abdullahi, who confirmed the development to journalists in Minna, Niger State, said: “We have resolved that Governor Bala Mohammed from the North-East and former Senate President, Bukola Saraki, from the North-Central be presented as the northern consensus candidates for the moment.

Read also: QuickRead: Utomi’s call for govt of national unity. Four other stories we tracked and why they matter

“The successful aspirants are hereby urged to work together to make allowance for further consultations to foster understanding among themselves and the PDP community to ensure a rancour-free primary in which all eligible candidates would be free to exercise their rights.”

Abdullahi’s statement may have further polarised the already divided party with just one month to its presidential primary, and landed a crushing blow to the consensus arrangement with many of those hitherto in support of the arrangement having a rethink.

If not quickly nipped in the bud, the development could further harm the PDP’s chances of regaining power next year with the discontent of many Nigerians over the party’s reluctance to zone its presidential ticket to the South still apparent.

The Ebonyi State Governor, Dave Umahi, on April 23 anointed the Speaker of the State House of Assembly, Francis Nwifuru, as his successor in 2023.

The governor, who confirmed the development during the burial of the father of the state’s Commissioner for Trade and Investment, Chioma Nweze, in Okposi area of the state, said: “To Okposi people and people of Ebonyi State, I present to you the choice of the people in the person of the Speaker of Ebonyi State House of Assembly, Francis Ogbonnaya Nwifuru. I want Ebonyi South people to know that when it was the turn of Ebonyi South, an Abakaliki man was contesting and the Abakaliki people said no, so it is time to pay them back.”

The governor’s choice of the speaker brings to fore the disturbing incidence of god-fatherism which often throws wedges into the democratic process and overturns the will of the people.

The development is not surprising because politics in Nigeria is basically driven by self-interest and in such an arrangement, politics of ideology has little or no space to thrive while that of patronage gains a foothold in the system.

Justice D.U. Okorowo of the Federal High Court, Abuja, on April 22 sacked the former Speaker of the House of Representatives, Yakubu Dogara, for defecting to the All Progressives Congress (APC).

He held that Dogara’s action was prohibited by law, saying the aim of Section 68(1)(g) of the 1999 Constitution was to check political prostitution among the legislators.

He said: “The action (defection to APC) of the lawmaker is prohibited by law and judgment is therefore given in favour of the plaintiffs. I hereby granted the reliefs sought by the plaintiffs.”

The judgment further highlights the urgent need to have the country’s apex court to give a final interpretation to the vexed portions of the constitution that deal on cross-carpeting by politicians.

This picture of anomaly is depicted by another court order which dismissed a similar suit challenging the defection of the Cross River State Governor, Ben Ayade, from PDP to APC.

The verdict, therefore, deepens the call for the Supreme Courts’s intervention or amendment of the constitution to finally resolve the impasse on who actually owns the mandate between the parties and the candidates.

Such a move will go a long way in checking political prostitution which has become the hallmark of Nigerian politics and restores sanity in the system.

QuickRead: Buhari’s warning on 2023 polls. Four other stories we tracked and why they matter

QuickRead: Osinbajo’s 2023 declaration. Four other stories we tracked and why they matter