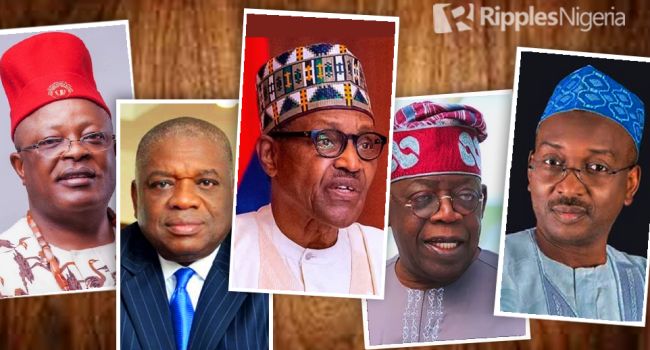 Since the former Lagos State governor, Bola Tinubu, confirmed his 2023 presidential ambition, the All Progressives Congress (APC) has been rocked by in-fighting between the Progressives Governors’ Forum and the party’s National Caretaker and Extraordinary Convention Planning Committee over its upcoming national convention.

This and four other stories dominated public discourse during the week.

In a statement issued by the PGF Director-General, Salihu Lukman, the governors said: “It is very difficult not to conclude that both the Chairman and all members of the CECPC have no respect for President Buhari, which is responsible for why they are doing everything possible to sabotage decisions validly taken to hold the APC National Convention in February after consultation with the President.”

The confusion over the conduct of the national convention has shown that all may not be well with the ruling party, and that the issue of internal party democracy remains an unresolved headache for most political associations in the country.

With just 13 months to the next national election, the party’s chances of retaining power for another four years may be slowly ebbing away over infighting.

With general disaffection by party members, especially after the conduct of the party congresses at various levels last year, Nigerians will not surprised if the party is hit by a gale of defections before the 2023 elections.

The Federal Government lifted the ban on Twitter on January 12. About four hours after the ban was lifted, the Special Adviser on Media on Media, Garba Shehu, was among the first group of people to use the microblogging platform.

He wrote: “Welcome back! Let me join fellow countrymen and women in welcoming the resolution of the impasse between the Federal Government of Nigeria and Twitter Inc., leading to the laying of a foundation for a mutually beneficial future with endless possibilities.”

Although it took the federal government over 200 days to lift the platform’s suspension, the development, nonetheless, opens up the space once more for freedom of expression and access to information.

Read also: QuickRead: Bandits get terrorists’ badge. Four other stories we tracked and why they matter

While these are basic ingredients of prosperous and secure democratic societies, the lifting of the Twitter ban, will, no doubt, act as a boost to the economy which reportedly lost over N10trillion due to the shutdown.

Above all, a resolution of the impasse could serve to up the momentum on issues of accountability by public officials.

The campaign team of All Progressives Congress (APC) National Leader, Bola Tinubu, on January 11 expressed confidence that their man would comfortably secure the party’s presidential ticket for next year’s election.

The Director-General of Bola Ahmed Tinubu Support Group Management Council, AbdulMumin Jibrin, who featured in an Arise TV programme, said: “I have said it time and time again that Bola Ahmed Tinubu will win the APC primaries, whether it is via direct or indirect Primaries and it is not a matter of luck.
“He had demonstrated capacity and invested in people; his achievements in Lagos speak for itself. I don’t see how he will lose the APC ticket.”

While boastful proclamations, such as Jibrin’s, serve to spice up the political space, they act to create unnecessary distractions by removing attention from key issues of capacity, character and competence.

The rabble-rousing may not inspire confidence in the populace about a process where sycophancy and political patronage are elevated above every other consideration.

Sadly, a peep into the horizon does not suggest that this unhelpful political culture would fade away soon.

The Ebonyi State Governor, David Umahi, on January 19, added his voice to the growing demand for state police in the country. He, however, asked the Federal Government to regulate the process.

Umahi, who stated this in an interview on Arise TV, said: “For example, two states share a common boundary and they are in two different parties, it might be a bad look due to the way we play politics in this country filled with hatred against the opposition. There have to be limitations on the powers of the State Police and it must be under the control of the Federal Police.”

Umahi’’s position reverberates among many Nigerians but meets a stumbling block in the autocratic stance of President Buhari.

The President’s emphatic rejection of state police deals a devastating blow to proponents of the idea and reminds the populace of the near monarchical powers held by the President.

Without Buhari’s approval, the likes of Umahi may continue to grandstand even while it is obvious that the ruling party and its acolytes are merely playing to gallery by pretending to be in support of state police while, in fact, they are basically playing politics.

The Senate Chief Whip, Orji Uzor Kalu, on January 13, waded into the growing call for restructuring of the country. Kalu, who appeared on Arise TV, however, said the process cannot take place without the input of the National Assembly.

The double speak on restructuring continues to expose the insincerity of the ruling All Progressives Congress (APC) which had promised restructuring in its manifesto, and even set up a committee for its implementation.

With growing discontent over alleged marginalization and other forms of injustice, it is baffling that the same dominant party has refused to seize the initiative and get the same touted National Assembly to act appropriately.

The path to national unity lies in not seeking short term gains but threading the tortuous path that leads to sustainable development built on mutual trust, equity, justice and fairness.

QuickRead: Unmasking sponsors of terrorism. Four other stories we tracked and why they matter

QuickRead: Bandits get terrorists’ badge. Four other stories we tracked and why they matter