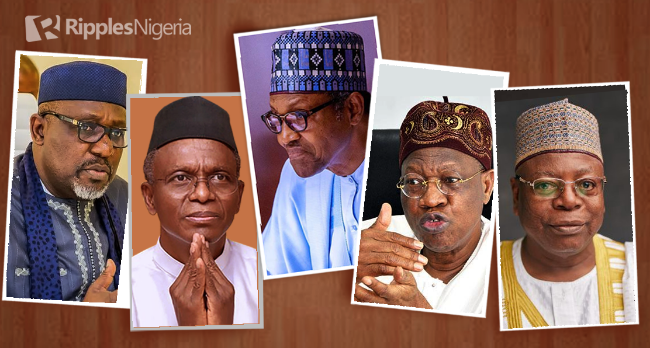 The Federal Government last week announced the discovery of 96 individuals behind terrorism in the country. This and four other stories has since been dominating public discourse.

The Federal Government said on February 3 security agents had uncovered 96 financiers of terrorism across the country, including those backing Boko Haram and the Islamic State of West Africa Province (ISWAP).

The Minister of Information and Culture, Lai Mohammed, disclosed this while briefing journalists on the administration’s anti-graft campaign in Abuja.

He said: “The Nigerian Financial Intelligence Unit (NFIU) revealed 96 financiers of terrorism in Nigeria between 2020 and 2021. At least 424 associates and supporters of the financiers were also uncovered by the security agents.”

Although the claim of uncovering terrorism financiers may sit well with some people, especially government apologists, that singular ‘feat’ does not mean the fight against insecurity has been won or that the citizens can sleep with their eyes closed.

The government must demonstrate its total commitment to the ongoing fight against insecurity by making public the identities of the so-called sponsors of terrorism and prosecuting them accordingly.

Anything short of this will confirm insinuations that the government has been merely grandstanding after months of foot-dragging on the matter.

2. EFCC and Okorocha’s face off

Okorocha, who addressed State House correspondents in Abuja, said: “I met with Mr. President and intimated him on what is going on between me and the Economic and Financial Crimes Commission…I also informed him that I have court judgment and two court orders for different judgments at different forums, which stop the EFCC from harassing and intimidating me. EFCC has refused to obey the law.”

Okorocha’s decision to seek Buhari’s intervention not only shows how much power resides with the President but confirms long-held fears that the EFCC is a weapon in the hands of the presidency.

The development is also a manifestation of an unquenched craving by the political class to evade justice and sidetrack the country’s judicial process.

Most importantly, it is a pointer to how the institutions of government are often manipulated by the ruling class for narrow group interests.

The Kaduna State government on February 1 released a report on the number of people killed by bandits in the state last year.

READ ALSO: QuickRead: APC’s divided house. Four other stories we tracked and why they matter

The state’s Commissioner for Internal Security and Home Affairs, Samuel Aruwan, presenting the report to Governor Nasir El-Rufai and others said:
“At least 1,192 persons were killed by bandits in Kaduna in 2021.
“Similarly, 3,348 were kidnapped while 891 people were injured during violent attacks by bandits and other criminals in the same period.”

The Kaduna report significantly represents a commitment to transparency by the government and confirms the appalling security situation not only in the state but the country as a whole.

Indeed, el-rufai’s reference to the security saga as an issue of insurgency clearly shows that the Northwest states have joined the Northeast as a war-ravaged region.

Therefore, the shared data is a wake-up call to government at all levels to act quickly and save the country from sliding further into anarchy.

The Senate on February 2 charged the Federal Government to undertake a holistic reform of the Nigerian Police Force.

This was one of the recommendations of the Joint Senate Committee on National Security and Intelligence; Defence; Police Affairs; Judiciary, Human Rights and Legal Matters.

The Chairman of the committee, Ibrahim Gobir, who presented the report at the plenary, said the October 2020 #ENDSARS protests led to massive looting of properties in Cross River State capital, Calabar.

He said, among others: “It was a free reign for amorphous groups, gangs, and criminals. At the time of the invasion of homes, the security agencies failed to promptly respond to distress calls from victims and several victims got hints of the planned attacks before the actual acts.

That the Federal Government is yet to commence the comprehensive reform of the force, almost two years after the #ENDSARS protests, shows its laissez-faire attitude to public complaints and commitment to improving the lives of citizens in the area of security of lives and property.

Unless the government takes a concrete step to address the problems, political tension should, therefore, be expected as Nigerians, particularly the youth, will move to make the government accountable for their actions and demand better governance.

President Buhari on February 1 promised that his administration would honour the agreement signed with the Academic Staff Union of Universities (ASUU).

Addressing members of the Nigeria Inter-Religious Council (NIREC) in Abuja, he said: “I challenge ASUU to take cognizance of the fiscal pressures that we are currently facing. Nevertheless, we remain committed to honouring our promises. My administration is committed to this engagement and dialogue, and I urge the union to stay the course toward a joint resolution in the best interest of our children and nation.”

A fresh strike by the university lecturers will not only spell doom for the country’s education system, but cast doubts on the integrity of the country’s leaders over their inability to honour agreements freely signed with workers or trade unions.

All said, the protracted impasse in the education sector clearly shows how much weight the country’s leadership attaches to learning, and knowledge as driving force for a new world economic order.

Until this fact is rightfully acknowledged, the country will only continue to wallow in ignorance, stagnate in technological advancements and occupy an insignificant place in mankind’s race for development.

QuickRead: Rise of Third Force mega party. Four other stories we tracked and why they matter

QuickRead: APC’s divided house. Four other stories we tracked and why they matter