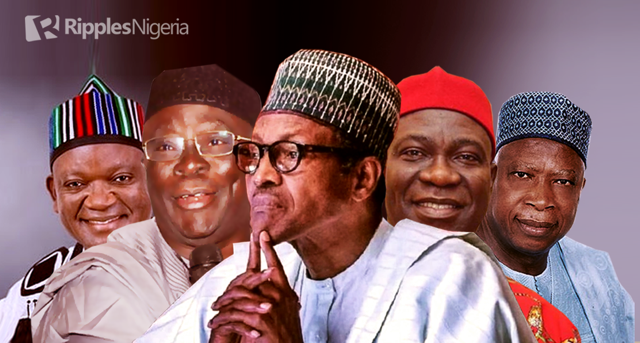 President Muhammadu Buhari, last week, travelled to the United Kingdom for another round of medical check-up. This and four other stories we tracked dominated public discourse last week.

On October 31, President Buhari traveled to the UK for a fresh medical check-up. The Special Adviser on Media and Publicity to the president, Femi Adesina, who disclosed this in a statement in Abuja, said his principal was expected back in the country in the second week of November.

The president, like every other mortal, is not immune from sickness and holds the right to seek treatment for any health emergency when the need arises.

However, the import of this medical trip is not lost on Nigerians. It speaks to how the country’s health sector has been neglected for years, so much that medical pilgrimage has become the acceptable order in the government circle with officials hopping on the next flight abroad in search of cures for all forms of ailment.

This development has further strengthened the calls for Nigerians to be circumspect by choosing leaders who will work the talk and stand by their promises in the 2023 elections.

The Economic and Financial Crimes Commission (EFCC) on November 4 moved to take hold of 40 properties belonging to the former Senate President, Ike Ekweremadu, who is currently in custody in the United Kingdom for alleged organ harvesting.

In an ex-parte motion filed at the Federal High Court, Abuja, the commission said the properties were located in Lagos, Enugu, Abuja, Dubai, the UK, and the United States.

“An affidavit identifying the properties as the focus of an ongoing investigation was attached to the ex-parte application with the file number FHC/ABJ/CS/1242/2022.
“10 of the landed properties are located in Enugu, three are in the United States of America, two in the United Kingdom, one is in Lagos, nine in Dubai, and 15 in the Federal Capital Territory (Abuja),” the commission said in a statement.

The move by the Federal Government to take hold of the former deputy senate president’s assets has again reaffirmed the place of law in the affairs of men, especially in a clime where corruption has become endemic and leaders reign with impunity.

This development, therefore, reinforces the call for anti-graft agencies to spread the dragnet further to unravel a system-wide malaise that has eaten deep into the nation’s fabric and bring to book all public officials who abuse their positions.

Ultimately, the prosecutorial processes provide the opportunity to, once again, test our institutions, especially the judiciary which appears occasionally compromised.

READ ALSO:QuickRead: Gov Wike’s endorsement of Sanwo-Olu. Three other stories we tracked and why they matter

Binani’s resignation from the campaign council followed the nullification of the primary that produced her as the party’s governorship candidate by the Federal High Court, Yola.

Raymond Chidama, APC Publicity Secretary had said: “Just this morning we saw her (Binani) letter of stepping down from that responsibility.”

The development may have confirmed insinuations that the lawmaker has been working against the party’s interest in the 2023 election after her picture appeared in a campaign poster featuring the Peoples Democratic Party (PDP) presidential candidate, Atiku Abubakar, earlier this year.

The resignation of the lawmaker from the APC campaign council further buttresses the claim that politics is an interest-driven, game coming several weeks after the nullification of her candidacy by the court.

The leader of the pan-Yoruba socio-political group, Afenifere, Chief Reuben Fasoranti, on November 1 dismissed claims on the endorsement of the Labour Party presidential candidate, Peter Obi, by the group.

The acting leader of Afenifere, Ayo Adebanjo, had repeatedly declared the group’s support for the former Anambra State governor.

However, the elder statesman says Adebajo lacks the capacity to stop him from receiving the All Progressives Congress (APC) presidential candidate, Bola Ahmed Tinubu, who is consulting eminent Nigerians on his presidential aspiration.

He said: “I remain the leader of Afenifere. Afenifere has not endorsed Obi. We are endorsing Jagaban (Tinubu) for the presidency.
“As you can see, the trend, the approval, and the acceptability. You could see what happened when Tinubu came to meet me in Akure. The media carried the whole thing. Adebanjo does not have the capacity to warn me not to welcome Tinubu. Can he do that successfully?”

The crisis of endorsement may further polarize the weakened political family that is still struggling for relevance.

The disagreement between the two leaders shows that the group has refused to learn from the mistakes of the past when they refused to speak with one voice.

While other regional groups are forging a common front ahead of the 2023 elections, their Yoruba counterparts are grappling with internal strife/contradictions that will have far-reaching implications even beyond the next national elections if allowed to fester.

The Benue State Governor, Samuel Ortom, on November 2 warned the leadership of the Peoples Democratic Party (PDP) over its decision to ignore the aggrieved governors on the crisis rocking the party.

Ortom and four other governors – Nyesom Wike (Rivers), Seyi Makinde (Oyo), Emeka Ugwuanyi (Enugu), and Okezie Ikpeazu (Abia) – are pushing for the resignation of the PDP national chairman, Iyorchia Ayu, to pave the way for a southerner to succeed him.

Ortom, who spoke at the inauguration of the State PDP Campaign Council in Makurdi, said it would be impossible for the party to win the 2023 presidential election if the leaders continue to call the bluff of the aggrieved governors.

He said: “It is not possible for us as a party to move forward without resolving the issues that I and my other colleagues are raising. These are the issues creating some challenges in the PDP. We must therefore come together as a team and work to resolve them.
“I want to assure you and all Nigerians that if our PDP presidential candidate is able to come out in sincerity and open up and resolve those issues, we shall work together. I am in PDP and I am working for the PDP and all our candidates from bottom to top.”

With just three months to the 2023 general elections, time is running out for the major opposition party to put its house in order and resuscitate its hope of reclaiming the presidency.

The reason why the PDP members are toying with their best chance of returning to power since 2015 with the protracted crisis has continued to confound many and unless a miracle happens, the party’s hope of winning next year’s election may have gone up in smokes.

QuickRead: Attack on Atiku’s campaign team. Four other stories we tracked and why they matter

CBN’s planned redesign of Naira. Four other stories we tracked and why they matter