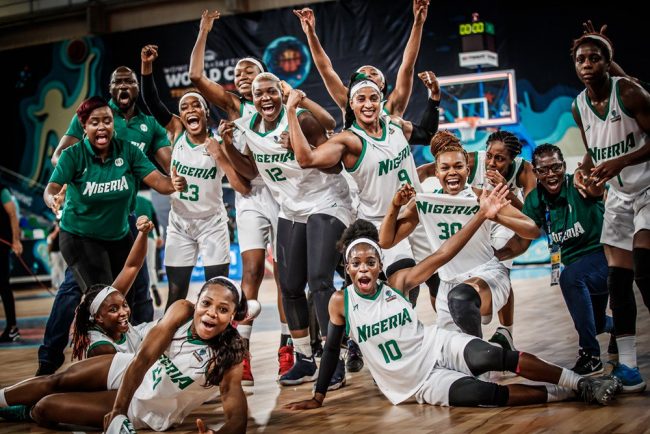 Nigeria women’s basketball team, D’Tigress, have attributed their record breaking feat at the ongoing FIBA Women’s World Cup to the support from the board of the Nigeria Basketball Federation (NBBF).

The Nigerian ladies became the first African team to reach the quarterfinals of the global competition after they saw off Greece in a thrilling encounter on Wednesday to set up a United States quarter final meeting.

D’Tigress had kicked off their campaign with a disappointing loss to Australia, but revived their hopes of progressing with wins against Turkey and Argentina in the group stages.

“We have never had this good until now. The world is talking about Nigeria upsetting bigger foes, but before we got to this stage, some people (NBBF) have been working behind the scene to make sure that the players have the best of preparation and a conducive atmosphere heading to the world cup,” team captain Adaora Elonu told NBBF media.

Speaking ahead of their quarter final game against USA on Friday, Atonye Nyingifa also said the team’s ultimate target having qualified for the quarter finals is to be crowned world champions.

Read Also: VAR to be used in UCL next season as Ronaldo serves one-match ban

“That is our focus and that is what we are driving at. It just seems that for the past 2 years, our team has had great momentum which can be traced to the federation’s determination to see Nigeria do things right and rule the world.

“As long as we play together, stick together and do what we know to be our identity, I have no doubt in my mind that we are going for the gold,” she said.

The forward who is not unaware of the threat posed by the world number one in their quest to win the coveted trophy said “We are going to expect them to come out playing hard and setting out with their best foot.

“They have a lot of height, speed on their team, they are a great team and they are projected to make it to the championships but I think we are going to go out there and give our best.”

One of the tournament’s leading rebounders, Evelyn Akhator said “Nobody thought we would make it this far except for the President who said that Nigeria can shock the world. Whoever God wants to win will win no matter the level of opposition.”

Having defeated Turkey, Argentina and Greece who are all ranked in the top 20 in the world, Akhator is not perturbed playing against USA.

“It does not matter who we are facing. They will try to defend their title I really don’t care. We have come this far and we are not looking back