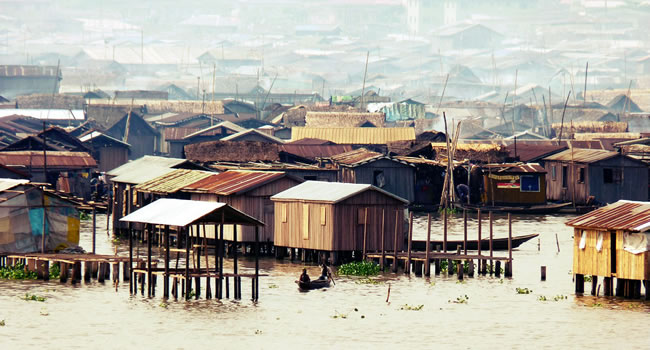 A report by the Human Rights Watch and Justice and Empowerment Initiatives (JEI) has revealed that more than 20 million residents of Lagos State live in slums and informal settlements due to high levels of urban poverty.

This the groups say, has left people vulnerable to the economic impact of the COVID-19 pandemic.

The report also stated that Lagos residents, despite making up more than 10 per cent of Nigeria’s population, received less than one per cent of the cash transfers paid nationwide between March and December 2020, noting that a new rapid response cash transfer program, intended to reach an additional 1 million people nationwide, which began in January 2021, was yet to be fully operational.

According to the report, the economic impact of the pandemic worsened the plight of families living in poverty in the state, and left many people struggling to afford food, and meet their basic needs.

The World Bank in January 2021 had forecast that the COVID-19 crisis would lead to an additional 10.9 million Nigerians descending into poverty by 2022, described as people living below the national poverty line of around $1 a day.

The report, “Between Hunger and the Virus: The Economic Impact of the Covid-19 Pandemic on People Living in Poverty in Lagos, Nigeria,” released on Wednesday, noted that the pandemic doubled the number of Nigerians experiencing hunger.

According to the report, the absence of a functioning social security system made government assistance, including cash transfers and food handouts, reach only a fraction of people going hungry.

The 87-page document showcased how the five-week lockdown, rising food prices, and a prolonged economic downturn had a devastating impact on informal workers, slum dwellers, and other urban poor families in Lagos.

Speaking on the report, Nigeria researcher at Human Rights Watch, Anietie Ewang, said the troubling reality of the Covid-19 crisis for many families in Lagos has been hunger and deprivation.

“With people still battling every day for survival, the pandemic has highlighted the critical need for a functioning social security system that will allow all Nigerians to achieve an adequate standard of living,” Ewang added.

According to the researcher, between May 2020 and March 2021, the organisation spoke with over 60 residents of 13 communities in the state and conducted multiple interviews to document the evolution of the pandemic and also analysed surveys by Nigeria’s National Bureau of Statistics (NBS), JEI and the Nigerian Slum/Informal Settlements Federation, an advocacy group for people living in poverty.

According to the report, a respondent, Margaret Okuomo, a mother of seven in Ago Egun Bariga area of the state, explained that she lost her job as a cleaner in March 2020, exhausted her meager savings, and was unable to feed her children.

“We [have] our fill in the morning, and sometimes at night we just soak two handfuls of garri [a staple made from cassava] and sleep,” she said.

Furthermore, Okuomo said she later got a new job to sweep roads in November 2020 but the rising food prices were still making her struggle to repay loans she incurred during the pandemic.

Meanwhile, the NBS data shows that nearly one-third of people surveyed in August 2020 had taken on debt during the crisis, as more than half of households used the loans to purchase food.

Also, the economic impact of the pandemic underscored the importance of the right to social security, which requires states to use a range of measures, such as unemployment benefits, cash transfers, and food assistance, to ensure people can obtain an adequate standard of living.

Furthermore, the report explained that prior to the pandemic; Nigeria lacked a functioning social security system, with the World Bank stating in 2019 only four per cent of the poorest 40 per cent of households had access to any form of social safety net program.

It would be recalled that in June 2020, the Federal Government passed a 2.3 trillion Naira ($6 billion) Economic Sustainability Plan that included money to expand a federal cash transfer program.

According to the available data, cash transfers reached about 921,445 households from March to April 2020 but lessened as the crisis raged on, benefitting 400,734 households in November and December 2020.