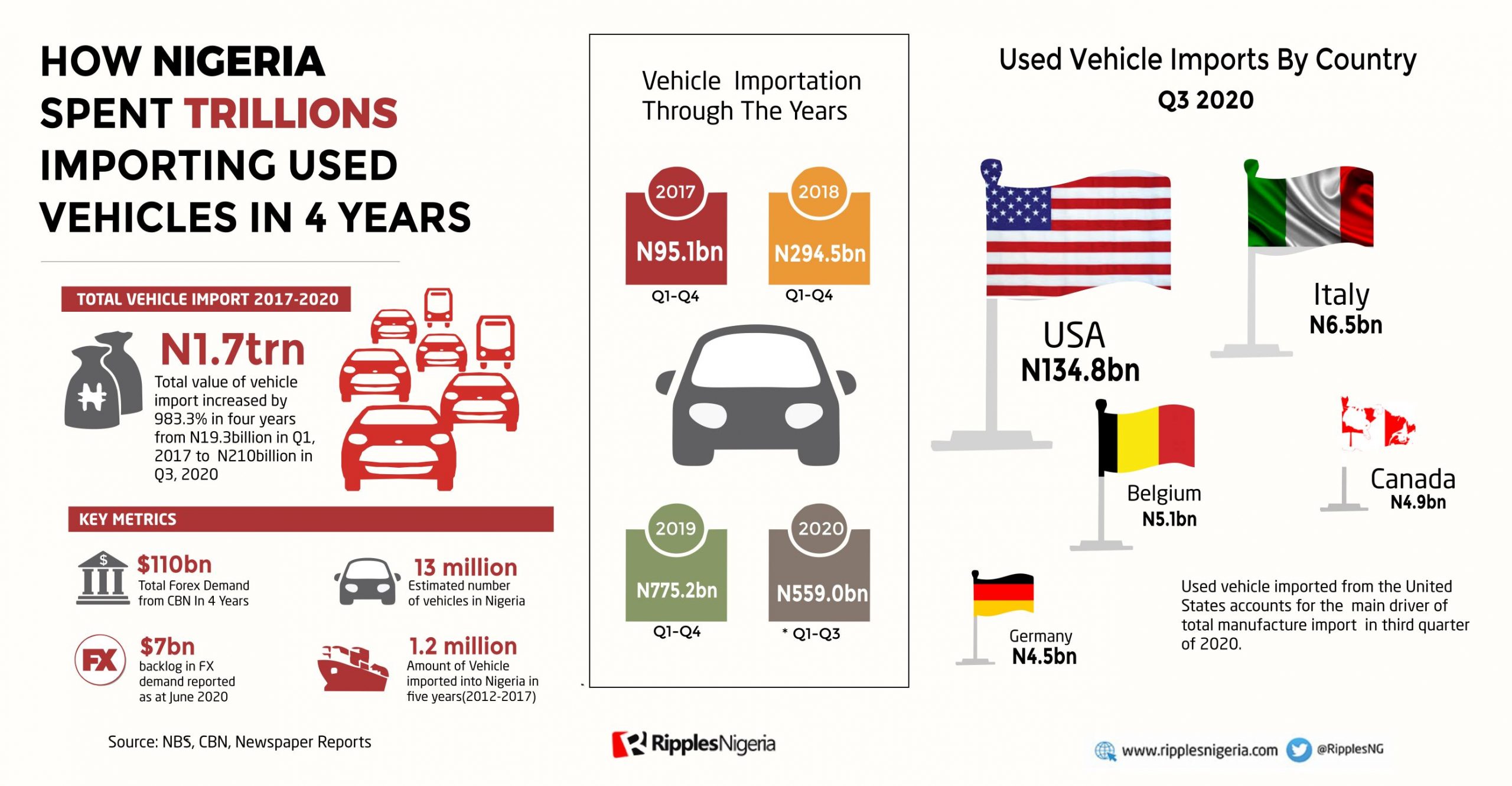 In the last four years, the amount spent by Nigeria, Africa’s largest economy, on importation of used vehicles, popularly known as ‘Tokunbo’, has risen by 983.3% to a total sum of over N1.7 trillion.

This comes as the federal government mulls more imports as it concludes a 35% duty cut to 4% for vehicles import into the country, thereby jeopardizing huge investments in local assembly plants.

The amount, which is according to data obtained from various foreign trade report ((2017-2020) released by the National Bureau of Statistics (NBS), also shows that a major chunk of Nigeria’s foreign exchange (fx) has been dedicated to buying used vehicles, with the item ranking an average of third on the value of all imported items within the period.

Interestingly, during the period under review, Nigeria’s foreign reserves fell by 8.7 percent from US$38.7 billion in 2017 to US$35.3 billion in 2020, putting extra pressure on Central Bank of Nigeria (CBN) over those looking to access dollars.

A side by side comparison between vehicles imported and forex demanded shows that importers demand for fx increased 522.3% from US$2.15bn in Q1 2017 to US$13.38bn as at Q1 2020, underscoring the depth of Nigeria’s foreign exchange pressure. It is speculated that government’s plan could worsen Nigeria’s fast depleting foreign reserves.

In June this year, a BusinessDay report estimated that the CBN was struggling with a backlog in FX demand put at US$7bn.
According to the report, the estimate of US$7bn was arrived at by bankers who say manufacturers have unmet dollar demand of US$2bn while foreign equity investors and foreign holders of the CBN’s OMO bills account for roughly US$5bn combined.

At the recent opening plenary of the 26th Nigeria Economic Summit (NES#26), Vice President Yemi Osinbajo explained that the decision to slash duty on imported vehicles was not an attempt by the government to kill the nation’s automobile manufacturing industry but to reduce the cost of transportation in the face of growing economic challenges.

He also argued that with an annual demand of about 720,000 vehicles, as against 14,000 local production capacities, the national need would not be met without importation.

But tying the malaise of short-term thinking to policy inconsistency, Mr Chidi Ajaere, Chairman of the GIG Group, addressed the recent reversal of import tariff on vehicles from 35% to 5% without due consultation with transport sector players. He branded the decision as another clear example of “policy summersault” by the government, expressing the frustration of investors in the industry who had committed enormous resources based on the content and projections of the previous policy.

He cited the case of Jet Motors Company which, alongside its partners, had already invested over five billion naira based on the now-sidelined automotive policy signed under former president Goodluck Jonathan.

Pulling no punches, Mr Ajaere said the policy “made no sense” to him, directly challenging the Minister of Finance, Zainab Ahmed, and Vice President Yemi Osinbajo, who were both in attendance, for justification.

An estimated 11.8 million vehicles are said to be on Nigerian roads. Also, from 2012 to 2017, NBS says traffic vehicle unit imported into the country was over 1.2 million.

Read also: RipplesMetrics: Nigerians to pay 54.9% more for Christmas pot of Jollof than they did five years ago

Findings by RipplesMetrics revealed also that since 2014, thirty-five licenses have been issued to producers of cars, trucks and buses currently operating in Nigeria with a combined installed capacity of 205,000 vehicles a year though far fewer numbers are produced due to huge funding, infrastructure and capacity gaps.

Speaking to Ripplesmetrics Jude Nwafor a transportation expert argued that the solution to the gaps alluded to by the vice president in his speech, can be solved within “if only the right policy and support is put in place”.

He said, “The Nigerian Auto Industry has for years been largely import driven although this has not always been the case. In the early 1960s, private companies such as the UAC, Leventis, SCOA and R.T. Briscoe pioneered completely Knocked Down (CKD) or Semi-Knocked Down (SKD) auto assembly in the country.

He argued that if more effort is given to automotive policy, Nigerian manufacturers can comfortably meet the transport need of Nigerians once again.

“When the automobile industry was thriving, Naira once exchanged at 80 kobo per dollar. During that time Nigeria’s citizens then rode in locally assembled cars, buses and trucks. Peugeot cars were assembled in Kaduna, and Volkswagen cars in Lagos, why can’t we have that again, I think the government needs to be sincere”.

“The inability to give the policy a legal backing has discouraged major auto makers across the world from investing in Nigeria as they prefer to invest in countries such as Rwanda, Ghana, South Africa, among others,” a journalist with bias for the auto industry said, on condition of anonymity, to RipplesMetrics.

“At the moment, Toyota, Suzuki and Volkswagen have settled in Ghana and their targeted market is where? Nigeria,” he added.

Related Topics:RipplesMetricstokunbo vehicles
Up Next

US approves new COVID-19 vaccine as cases surge past 17m