Sen Abe would have been Rivers gov if he had listened to me, Wike says | Ripples Nigeria 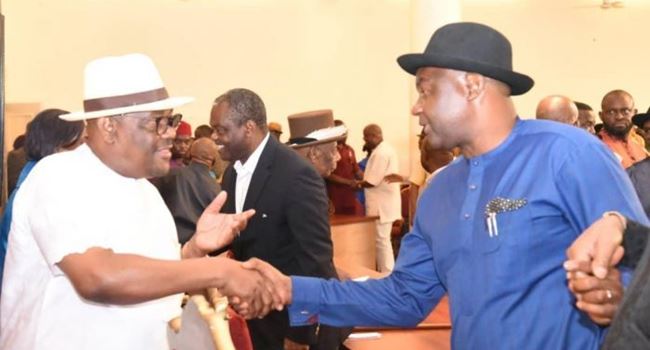 Governor Nyesome Wike of Rivers State, on Monday claimed that Senator Magnus Abe would have today been the governor of the state if he had listened to his advice to leave former Governor Rotimi Amaechi’s government.

Wike made the claim at the Government House, Port Harcourt when Abe’s kinsmen, Ogoni indigenes visited him, adding that he had not promised any ethnic group in the state the position of the governor.

He said: “Let nobody say that I have met with Ogoni Ethnic Nationality and I promised them governor. I didn’t promise because I cannot give.

“It is only God that will give the position of governor. With proper arrangement, things can be done. Don’t say I made a promise; don’t rely on anyone, just work hard. As Nyesom Wike, I can only support but cannot make anyone governor.“Take me as an example. Someone sat here and said over his dead body would I be governor. Am I not governor today? I am heading towards eight years.

“Nobody should threaten you that you cannot be governor. Don’t allow anyone to take the glory of God.”

Read also: Despite the alarm raised by many, Senate set to pass Buhari’s $29.9 billion loan request

Both Wike and Abe served under former Governor Rotimi Amaechi as Chief of Staff and secretary to the State Government respectively.

It would be recalled that Wike had granted an interview immediately he became governor on how he fell out with Amaechi and his warning to Abe about their mutual friend, the now Minister of Transport.

“When I was made a minister in 2011, it was in December at the Governor’s Lodge in Abuja, he (Amaechi) called a meeting. I sat in that meeting; I didn’t talk. He tried to cause crisis in my local government. When he finished, Magnus drove me to my house that evening. I told Senator Magnus Abe that I would no longer come to Government House. But let me tell you, you will be the victim at the end of the day. Magnus pleaded with me, saying, ‘no, this man is our man and we can trust him.’ I said, Magnus, ‘you can go ahead; I know this man.’ And God has saved me. I said, ‘Magnus, bet me, you will be the one that will pay for it. The man does not like you’.”

Wike and Abe were however engaged in a bitter rivalry towards the 2016 Senatorial election rerun in the state in which Abe was a candidate.

The Senator accused the governor of inciting violence during the campaigns, calling for the arrest of supporters of the People’s Democratic Party, who he said were stoking violence on the orders of the governor.

be however won the election.