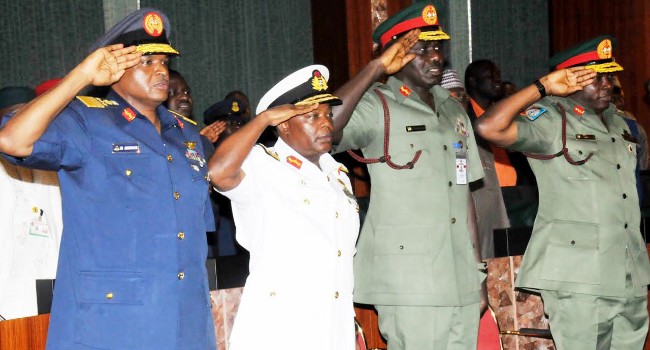 The Peoples Democratic Party (PDP) on Tuesday, February 23, criticised the confirmation and deployment of the former Service Chiefs as ambassadors-designate.

This was contained in a statement issued by the PDP spokesman, Kola Ologbondiyan.

According to the opposition party, the Senate hurriedly screened the former service chiefs despite pending petitions against them in a bid to grant them immunity

“It is indeed horrendous that the All Progressives Congress (APC) leadership in the Senate could choose to betray Nigerians by rushing to clear the accused ex-Service Chiefs in a desperate attempt to grant them diplomatic immunity and shield them from investigation and prosecution for the atrocities committed against Nigerians under their command.

“Though it is public knowledge that the current APC Senate leadership is a mere rubber stamp and contrivance being used to endorse atrocious policies and suppress the will of the people, but descending to the level of aiding and abetting a crime against humanity by attempting to confer diplomatic immunity on the accused ex-commanders is, to say the least, despicable.

Read also: After calling for their removal, Lawan lobbies for posting of ex-service chiefs

“It is indeed shameful that the APC leadership in the Senate could clear the ex-service chiefs, who the National Assembly had earlier indicted and requested for their sack over security failures and alleged compromises. Such reward for failure amounts to stabbing our nation in the back,” the PDP statement read.

The confirmation of the nominees which followed consideration of the report of the Committee on Foreign Affairs, however, was challenged by the Senate minority leader, Senator Enyinnaya Abaribe (Abia South).

Abaribe questioned the blanket dismissal of the petition against the nominees by the committee without giving an explicit reason for doing so.

He said the submission of one of the petitioners, one Dickson that the nominees, having failed in their responsibilities as service chiefs to secure the country, do not deserve ambassadorial appointments, is in line with the senate’s request three times that the service chiefs should be replaced.