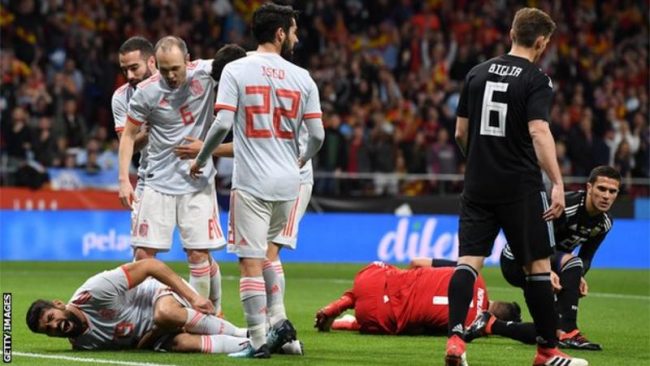 ​Real Madrid star, ​Isco scored a hat-trick as Spain warmed up for the 2018 World Cup by crushing ​the South Americans 6-1​ in Madrid.

​The hosts​ raced into a 2-0 lead when Diego Costa stabbed past Sergio Romero before Isco side-footed his first goal.

Argentina, without injured forward Messi, pulled it back to 2-1 through Nicolas Otamendi’s header.

​But ​Isco and Thiago Alcantara extended the lead to 4-1, with substitute Iago Aspas adding the fifth before Isco completed his hat-trick.

Spain are now unbeaten in 18 games since Julen Lopetegui took charge following their exit at the first knockout stage of Euro 2016.
​
I​n another friendly game played on Tuesday, England were held to a 1-1 draw by Italy after ​a late penalty awarded by the video assistant referee (VAR) ​canceled Jamie Vardy’s opener ​at Wembley​.

Elsewhere, ​World Cup holders, Germany lost for the first time in 23 matches as Manchester City forward Gabriel Jesus scored the only goal to give Brazil ​victory​ in Berlin.