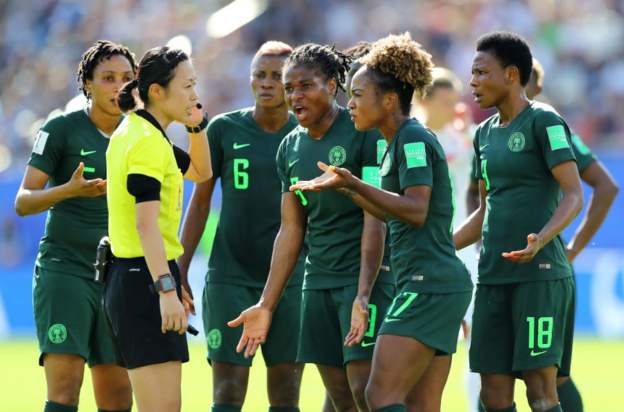 Nigeria women’s national team, Super Falcons have crashed out of the FIFA Women’s World Cup after losing to Germany in the round of 16.

The game, played at Grenoble in France on Saturday, saw the Falcons fall 3-0, with two goals coming in the first half and one in the second.

After some back and forth by both teams, Germany broke the deadlock in the 20th minute when Alexandra Popp headed in the opener.

The goal was allowed to stand by referee Yoshimi Yamashita after she deemed Svenja Huth was not interfering in play while in an offside position.

The Germans doubled their lead 7 minutes later after another VAR check as Sara Däbritz beat goalkeeper Chiamaka Nnadozie to the right corner.

The penalty was awarded after video replays confirmed that Evelyn Nwabuoku had fouled Lina Magull in the box.

Nigeria, with quite a massive support from the locals of Grenoble, fought resiliently in the second half but missed a clear chance when Desire Oparanozie could not slot in a cross from Rasheedat Ajibade.

Their hopes of staging a comeback were dashed when Lea Schueller pounced on poor communication in Nigeria defence to score Germany’s third goal in the 82nd minute.

The Falcons, who started with a 3-0 defeat to Norway but bounced back with a 2-0 victory over South Korea before losing 1-0 to France in the group stage, could not equal their 1999 record of reaching the last eight.

Germany have now qualified for the last-8, where they will face either Sweden or Canada.