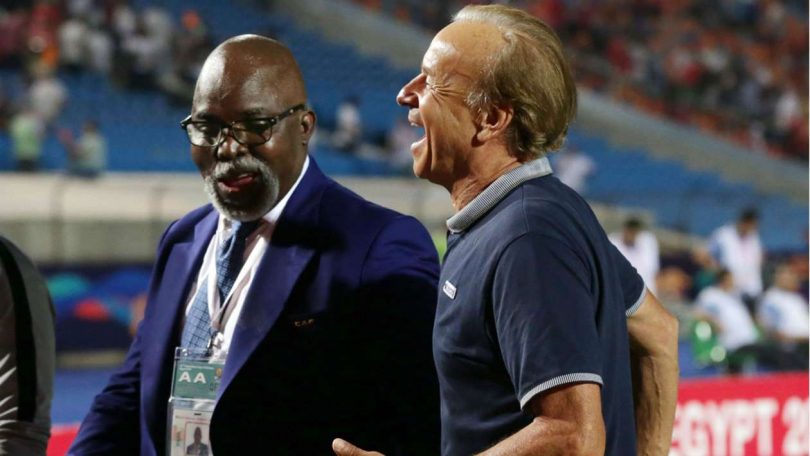 Gernot Rohr has pointed out the main reason why he has not been kicked out of his job as coach of Nigeria’s Super Eagles.

The 66-year-old, who has been the boss of the national team since 2016, told a French tabloid that it is not in the character of the Nigeria Football Federation (NFF) to keep a coach for so long.

Rohr led the Super Eagles to the group stage of the 2018 World Cup before going on to win bronze at the 2019 Africa Cup of Nations. He said the only reason he is still working with the team is that results have been good.

“I have been there (with the Eagles) for more than three years and it is long for Nigeria, because rarely can a coach be maintained as long,” Rohr told Girondis33.com.

“It was possible because the results were good, the team has evolved and that we accomplished the mission of rejuvenation.”

“It was planned and we managed to do it with young players including Samuel Kalu and Josh Maja, and we have others in England, in Spain, etc. We no longer have a big star, because John Obi Mikel has retired. Victor Moses also retired for family and age reasons. Our top scorer Odion Ighalo also retired after AFCON 2019 in Egypt.”

“So we have a very, very young, promising team,” he added.

Talks about Rohr continuing with Nigeria have been in the media space for quite sometime now, and the Franco-German gaffer mentioned that he will be meeting with the NFF next month.

The NFF has admitted it would like Rohr to continue with the team, but, as part of the new contract to be signed, Rohr will have to agree to live and work in Nigeria, and have his wages taxable.

“We will see the leaders soon,” Rohr said.

“The meeting is planned for the month of February and possibly before the Africa Cup of Nations qualifying matches in March. We can agree on the new contract.”

Meanwhile, Clemens Westerhof, who was in charge of the Nigerian national team for five years from 1989, remains the longest serving coach of the team.