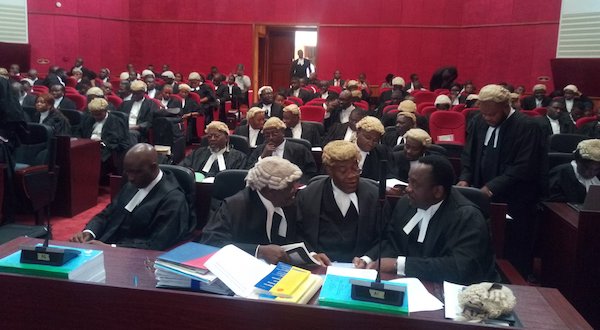 The International Society for Civil Liberties and the Rule of Law (Intersociety) says democracy in Nigeria is dead, adding that it is being buried by the judiciary.

The rights group was reacting to the judgment delivered on Wednesday by the Presidential Election Petition Tribunal which upheld President Muhammadu Buhari’s election against Atiku Abubakar.

In a statement issued on Friday, Intersociety said that Nigeria’s judiciary, in electoral midwifery and rule of law particularly, had collapsed with respect to its independence, impartiality and credibility.

The statement which was signed by the chairman, board of trustees, Emeka Umeagbalasi, called for the upgrade of the educational qualification required for president or governor in Nigeria.

It recommended a Master’s degree for those seeking to become governors or president in Nigeria.

“It also amounts to racing back to the cave from being Africa’s cradle of knowledge for Nigeria’s seats of Presidential and Gubernatorial powers to be cheaply and illiterately occupied by persons without physically proven or certified educational certificates or qualifications,” the statement read.

“It is further insulting beyond quantification to the modern day knowledgeable world for the offices of the President and Governor in Nigeria to be allowed to be occupied by persons with ordinary secondary school or primary school certificates-whereas in other social climes, such are occupied by professors and doctorate degree holders with unassailable charisma.”

The group said that it would be wise to raise the educational qualification of governors and the president of the country if it must develop alongside other countries of the world.

“It is, therefore, time to mandatorily, constitutionally and statutorily raise the qualification for the seats of the President and Governor and their deputies in Nigeria to nothing less than Master’s Degree.

“Ignorance and stark illiteracy must never be allowed a space over knowledge and ideas in the country’s corridors of power. As a jurisprudential tradition in the world over, judicial blunders and disasters such as the instant case arising from apex and appellate decided cases are periodically remedied by ways of constitutional amendments or enactment of new laws to take care of such judicial blunders or disasters.

“We hereby call on the National Assembly of Nigeria to act on the above without further delays,” the group said.