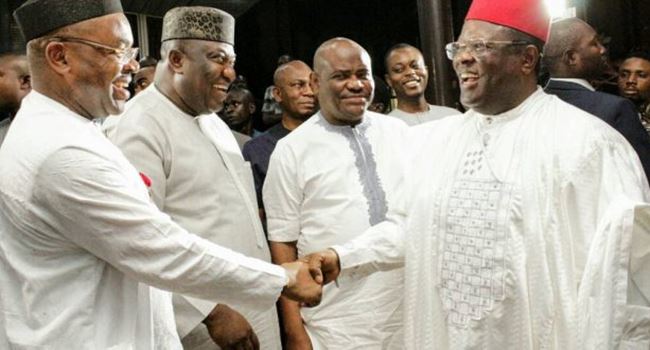 Governors of the Southeast geopolitical zone on Sunday, said arrangements have been concluded to launch its regional security outfit soon.

The governors also directed state houses of assembly in the region to enact an enabling law for the outfit.

Ebonyi State Governor, David Umahi, stated this while reading the communique issued at the end of the Southeast Governors Forum.

“Forum took briefing from the chairman of the Joint security committee and are satisfied with all the arrangement that will lead to South East State Houses of Assembly to enact a law to back the South East security programme with a name to the outfit.

Read also: We’ll continue to insist on adequate security for Nigerians – CAN

The meeting had the governors of Enugu, Ifeanyi Ugwuanyi; Ebonyi, David Umahi and Abia, Okezie Ikpeazu in attendance. The Anambra State Governor, was represented by the deputy governor, Nkem Okeke, while Chief Hope Uzodinma of Imo State was not in attendance, neither was he represented.

Uzodinma, is the only governor in the region from the ruling All Progressives Congress (APC). He was only recently out in that office by a ruling of the Supreme Court, which removes Emeka Ihedioha of the People’s Democratic Party (PDP).