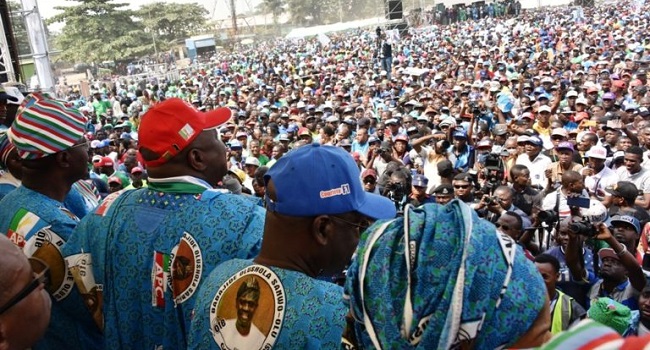 No less than two persons are feared to have died on Tuesday following violence that erupted during the official campaign flag-off of the All Progressives Congress (APC) in Lagos State.

Several other persons including journalists covering the campaign also sustained diverse degree of injuries as a result of the violence.

The party campaign flag off was taking place at Skypower Ground, Ikeja G.R.A, when several gunshots by thugs sent people at the event scampering for safety.

Two rival groups started the fight when the state governor, Akinwunmi Ambode was speaking to the crowd at the venue of the campaign.

Popular leader of the National Union Road Transport Workers (NURTW), MC Oluomo, was reportedly stabbed during the fight which was said to have been caused by the thugs believed to be factional members of the NURTW, who invaded the event venue with guns, daggers and other dangerous weapons.

It took the concerted efforts of security operatives to calm the situation.

Meanwhile, while the brouhaha raged, Ambode, who was making a speech, quickly left the stage abruptly and was escorted out of the venue with his deputy, Idiat Adebule, the APC governorship candidate, Babajide Sanwoolu, and other prominent members of the party.

The violence also saw several people at the venue lose their cell phones, money and other valuables.