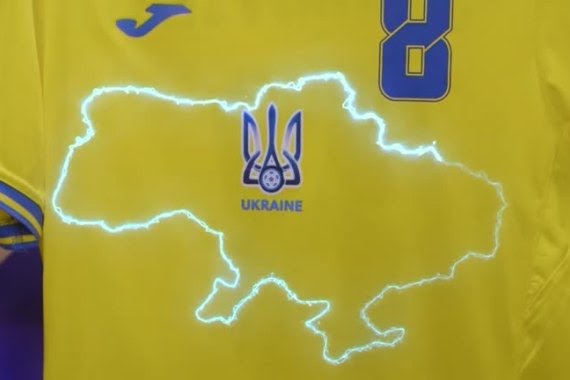 Ukraine’s Euro 2020 football kit has provoked anger in Moscow, Russia, according to reports from Europe.

The head of the Ukrainian football association, Andriy Pavelko, had revealed the kit in a video on his Facebook page on Sunday.

The yellow shirt shows the contours of Ukraine in white, including Crimea and the pro-Russian separatist-controlled regions of Donetsk and Luhansk, and the slogan “Glory to Ukraine!”

Russia had annexed the Crimean peninsula from Ukraine in 2014, and considers it a part of its territory, something rejected internationally.

The European football’s governing body Uefa, according to the BBC, already said: “The shirt of the Ukrainian national team (and of all other teams) for Uefa Euro 2020 has been approved by Uefa, in accordance with the applicable equipment regulations.”

A slogan on the back of the jersey reads “Glory to Ukraine!” – a patriotic chant used as a rallying cry by protesters who forced out a pro-Moscow president, Viktor Yanukovych, in 2014.

Another slogan – “Glory to the heroes!” – is stitched on the inside of the shirt collar.

Both it and “Glory to Ukraine!” are used as official military greetings in Ukraine.

She said the slogan was nationalistic and echoed a Nazi rallying cry.

Euro 2020, initially billed to take place last year was postponed due to Covid-19 pandemic, and will now run from 11 June to 11 July across 11 host cities.

Related Topics:euro 2020RussiaUkraine
Up Next