Why we disqualified Obaseki, two others —APC | Ripples Nigeria 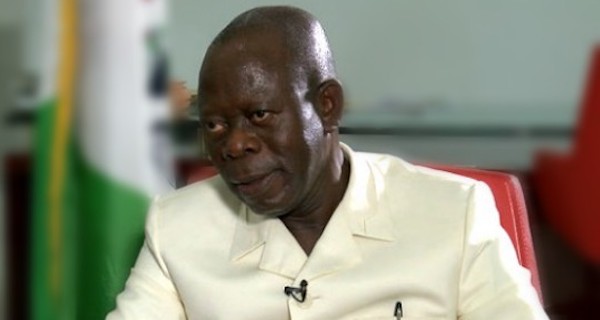 The All Progressives Congress (APC) Screening Committee on Friday explained why Edo State Governor, Godwin Obaseki, was disqualified from the governorship primary.

The chairman of the committee, Prof. Jonathan Ayuba, who presented the report to the party’s National Working Committee (NWC) in Abuja, said the governor was disqualified for alleged discrepancies in his names and certificates.

He added that Ogiemwonyi was disqualified for the same reason while Iduoriyekemwen lost out for instituting a suit against the party without exhausting all mechanisms of settlement in line with the APC Constitution.

He said: “We are staking our integrity. The integrity of the process in this country in order to arrive at what we have done. Mr. Chairman, our report is conclusive. Every member signed and has agreed with what we have decided at the committee level. This is essential because we want to be judged by what we have done and what we are presenting.

“We were thorough in the manner in which we conducted the exercise. We recorded the live interaction with each of the aspirants. The unedited clip is what we are giving as part of our report. We want to be judged by what we have done and not by what a third party says or by rumour.

“The methodology we used is clear. It was evidence-based. All we did was an interaction.

“We screened six aspirants. Three were eligible to contest and three were deemed ineligible to participate.

“The first candidate was Mr. Osaro Obaze. The committee after screening and the verification of the candidate’s documents found him eligible to contest the primary. Based on the committee’s observation above, the candidate is cleared.

“Engr. Chris Osa Ogiemwonyi: The name on all the certificates presented by the aspirant are in contradiction with one another. Also the sworn declaration of age deposed to by one Capt. Stephen on 3rd June 2016 bore two conflicting names of the aspirant. Considering the discrepancy in all the certificates presented and also the difference in the names contained in the sworn affidavit of June 2016, and having regards to the Constitution of the Federal Republic of Nigeria, the Electoral Act, APC Constitution and the party’s guidelines for the nomination of candidates and the reliance on the cases that have been settled by the Supreme Court and the Court of Appeal, it is the considered view of the committee that this aspirant does not meet the requirements to participate in the primary election of the APC.

“In view of the findings of the committee above, Engr. Chris is not cleared.

“Dr. Pius Odubu: The observations are that the name Pius Egberanmwen Precious Odubu appeared on different documents. However, an anomaly was cured in the affidavit deposed to by his father and our recommendation is the Pius Odubu is eligible to participate in the election.

“Mr. Godwin Obaseki: Though, His Excellency, Godwin Obaseki in his nomination form claimed to have obtained a Higher School Leaving Certificate from an Institute of Continuing Education, Benin. It was observed however that no educational certificate such as HSC is known in Nigerian educational system. Even then, the same HSC was never presented in the course of the screening exercise. The aspirant admitted that he has never collected it.

“The attestation from the Institute of Continuing Education, Benin from where the alleged HSC which was indicated in the field of attendance as obtained is of no consequence, as it only attests that Obaseki was a student of the Institute. So what we had was like an attendance. It was just attendance, it was not a result.

“Although, the Committee received a petition on his University of Ibadan Bachelor of Arts Classics certificate which he submitted to INEC in 2016, when he first contested as governor, the committee on further probing was presented with original certificate issued by the University and the original was sighted.

“In our interaction with issues raised, we concluded that HSC was defective. The NYSC certificate and the fact that the aspirant took the party to court, the above aspirant, His Excellency, Godwin Obaseki, therefore, is not eligible to participate in the election.”

Related Topics:APCGodwin Obaseki
Up Next