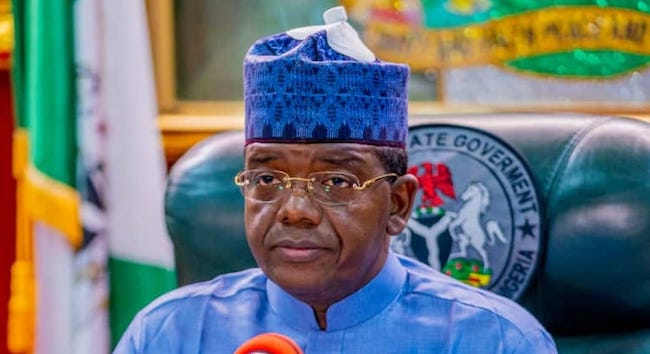 The Zamfara State chapter of the All Progressives Congress (APC), has accused the Peoples Democratic Party (PDP), in the state of scuttling security measures being put together by Governor Bello Matawalle.

This came in the aftermath of the opposition party’s condemation of the call by the governor for residents to obtain guns for self-defence.

The PDP had, through its Executive Secretary, Faruk Ahmed, at a press conference in Gusau on Saturday, described Matawalle’s call as an invitation to anarchy in the state.

He also accused Matawalle of manipulating the security situation in the state in order to hound critics of his government.

“The ruling APC administration’s failure has left Governor Bello Mattawale with no option but to manipulate the insecurity situation within the state to witch-hunt opposition parties in the state.

“As such, the PDP perceived the exercise as a deliberate attempt to divert public resources,” Ahmed had said, among other things.

But while reacting to the accusation in a statement on Sunday, the state APC Publicity Secretary, Yusuf Idris Gusau, said comments credited to the PDP Secretary goes to show the “mindless way the opposition party feels over the havoc being perpetrated by bandits.”

Gusau said it was “shocking to hear someone who is a living witness to the terrible security situation in the state condemning the additional measure taken by Governor Bello Mohammed Matawalle to protect people’s lives and property.”

The statement made available to Ripples Nigeria reads in part:

“Faruk Ahmed’s deliberate failed attempt to truncate the measure via the unlettered brain further exposed and confirmed the APC’s accusations that the opposition PDP which has always been critical of all attempts to subdue the bandits have a hand and will not want the banditry to end.

“It is no longer news that Matawalle has exhausted all available avenues to fight bandits and banditry in Zamfara State, from reconciliation to peace accord, to mobilizing resources and equipment to security agents, to getting more deployment of security personnel to mobilizing neighbouring states and even neighbouring Niger Republic but the menace seemed unabating.

“Many ideas were deployed to the state, still the problem persisted, so if the PDP, especially the Zamfara chapter does not have a workable solution, it should shut up and let the government do the needful to its expecting citizens.

“More so, apart from other state governments having set up various security outfits to secure their territories from criminals, Matawalle took time to set up different organs and committees that will ensure that nothing goes out of hand.

“It is a known fact that PDP in the state is not happy with the new security measures put in place because it has truncated their evil plans to use insecurity as a weapon of the campaign but now they are sure of complete defeat by the APC in the coming 2023 elections.

Related Topics:APCMatawallePDPZamfara State
Up Next