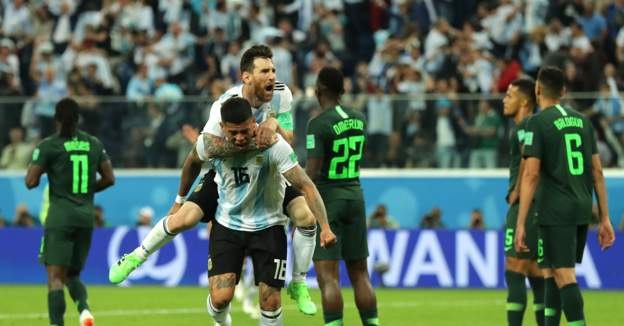 The Super Eagles of Nigeria failed to reach the knockout stages of the 2018 FIFA World Cup after losing 2-1 to Argentina in a crucial Group D clash at the Krestovsky Stadium, Saint Petersburg on Tuesday night.

The result means Nigeria have been beaten for the fifth time in their fifth meeting with the Argentines at the mundial.

After a heated start to the game, Barcelona star Lionel Messi opened the scoring to put the Argentines ahead in the 14th minute.

Early in the second half, Leon Balogun was pulled down by Mascherano in the Argentina box during a corner, and a penalty was awarded, which Victor Moses took and sent goalkeeper Franco Armani the wrong way.

Nigeria thought the game was going to end in a draw, which could have favoured the Super Eagles, but an 86th-minute goal by Marcos Rojo sent the South Americans to the last 16.

In the other game of the group, Croatia defeated debutants Iceland 2-1 to seal their place as winners.

First-half goal by Sverrir Ingason and a late winner by Ivan Perisic made Gylfi Sigurdsson’s converted penalty of no effect.

As group winners, Croatia will face the runners-up of Group C – Denmark – while Argentina will take on Group C winners – France.