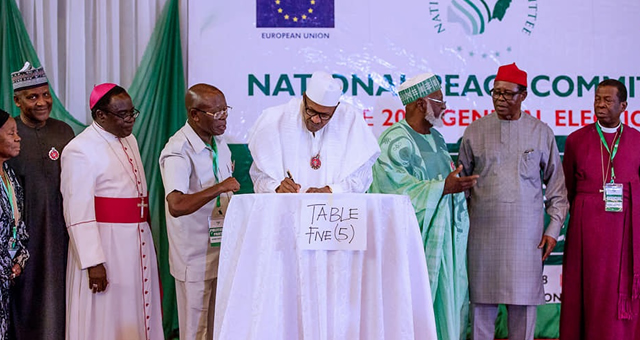 Both Atiku and Sowore claimed that they were not officially invited for the event organised by the former Head of State, General Abdulsalami Abubakar-led National Peace Committee for the 91 chairmen of the registered political parties and the 73 presidential candidates participating in the next year’s election.

Both Duke and Ezekwesili are yet to give reasons for also not being part of the signing of the peace accord at the time of this report.

On his part, Atiku said through his media aide, Paul Ibe, that he got no invitation to attend the event, and so did not bother himself being there.

Sowore, who expressed dismay over his exclusion said in a message on Twitter, “First they excluded AAC party from the signing of Peace Agreement and Memorandum of Understanding by Presidential Candidates and Party Chairmen in Abuja today (yesterday).

“Just emerged also they don’t want me to participate in the presidential debates, they claim I am out of control and may spill what I know about these oldies publicly during debates. These old guards still don’t get it!

“This is exactly what they are afraid of! They can’t stand the revolutionary spirit of a youthful fearless Nigerian sharing the podium with old cargoes to debate Nigeria’s future!”

The chairman of the Peace Committee, Abdulsalami had since debunked the claim that some presidential candidates were not invited for the event.

He told newsmen at the event on Tuesday, “You have seen the number of parties that have been invited. He (Atiku) will answer for himself but speaking for the National peace committee, everybody was invited. What reasons do we have not to invite somebody? This accord was for all political parties to sign to be of good will and good behaviour during elections.”

Meanwhile, political parties’ chairmen at the event on Tuesday accused the organisers of according preferential treatment to President Muhammadu Buhari and the APC national chairman, Adams Oshiomhole, during the event.

The aggrieved party chairmen had womdered why Oshiomhole was allowed to have a group photograph with the committee members excluding them.

But Abdulsalami later apologized to them and their presidential candidates for any lapses recorded.