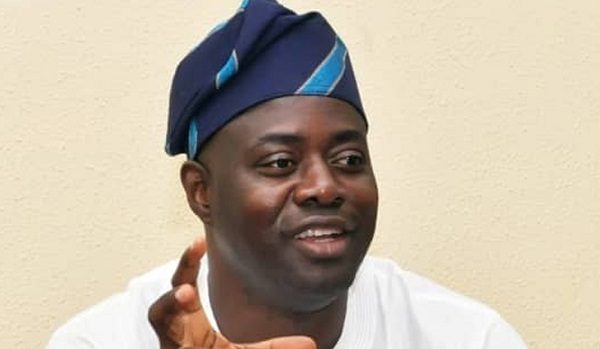 Oyo State Governor-elect, Mr. Seyi Makinde has warned that any action taken by the outgoing administration in the state that has effects beyond the May 29 handover date will be considered to be in bad faith.

Makinde gave the warning in a letter to the outgoing governor of the state, Senator Abiola Ajimobi on Tuesday.

The governor-elect also called on Ajimobi to rein in his appointees, who he accused of engaging in activities that could hamper the take-off of new government on May 29.

Makinde singled out the state’s Pilgrims Board (Muslim wing) of announcing plans beyond the May 29, 2019, when the tenure of the government would have ended, in the letter.

He also alluded to the alleged instruction given to local government chairmen to mop up the stabilisation account, describing it as another move by the representatives of the government to scuttle the transition process.

The letter reads in part: “Your Excellency, since March 11 this year and 48 hours after the gubernatorial election, I have observed serial infractions that connote efforts to thwart smooth transition come May 29, 2019 under the guise of spurious legitimacy.

“I have highlighted some of them to the public through my campaign office, including but not limited to deliberate haste to rush out fresh contracts, backed with mobilisation running into billions of naira even while other residual issues of more importance were crying for attention.

“The instruction to the LG chairmen to mop up the Stabilisation Account which was strategic savings is also one of the infractions I refer to.

“I wish to draw your attention to yet another development in similar manner presently playing out at the Oyo State muslim wing of the Pilgrims Welfare Board, which continues to make far-reaching plans and even radio announcements in relation to the board’s activities beyond May 29, 2019, when it is crystal clear that the tenure of this outgoing government ends on the above-stated date.

“While the chairman and the board are still well within their rights to function in that capacity till the end of this outgoing administration, it is however unacceptable and mischievous for the board to be making long-term plans that are well beyond May 29, 2019 with regards to the coming hajj operations, as my administration will not be bound to accept any of these arrangements, including transportation, accommodation and welfare of Oyo State pilgrims for the coming hajj operations.

“Any action executed by the board that will continue after May 29 will be considered to have been initiated in bad faith. I, therefore, call on your Excellency sir, to prevail and rein in all overzealous officials who may wrongfully perceive the lame duck situation in Oyo State as a gold rush.”