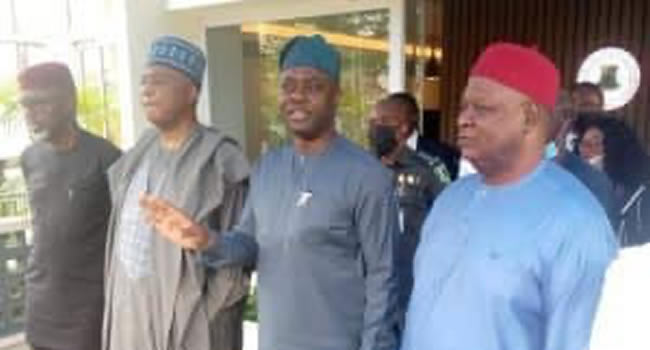 Ahead of the 2023 presidetial election, politicians have begun clandestine meetings to take positions with former Senate President, Bukola Saraki, making consultations with stakeholders in the Peoples Democratic Party (PDP).

A few days after meeting with the Rivers State Governor, Nyesom Wike, it was the turn of the Chairman of the National Reconciliation Committee of the PDP, Chief Anyim Pius Anyim, former Governor of Cross River State Liyel Imoke, and Oyo State Governor, Seyi Makinde, to meet with Saraki in Ibadan on Tuesday.

Though details of the closed-door meeting that lasted for about 30 minutes were not made public, speculations are rife that it had to do with positioning Saraki for the presidential race.

It was gathered that after the meeting, Makinde who briefed journalists at the Government House, said a press briefing will be held in due course to let Nigerians know the position of the party stakeholders.

However, reliable sources say part of the agenda at the meeting was for the PDP Reconciliation Committee to meet factional leaders of the party on ways to resolve the lingering crisis rocking the party in the state.

Ripples Nigeria will bring you updates on the meeting as events unfold.