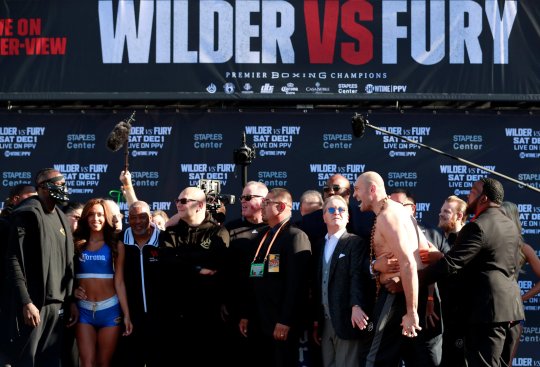 Despite the fight being announced in mid-August, it took until the end of September for confirmation of the host venue.

Both fighters go into the fight unbeaten in their combined 67 professional bouts in a fight expected to be watched by millions across the United States and the rest of the world.

Wilder, who has had 39 KnockOuts in 40 fights, is statistically the heaviest puncher in heavyweight boxing history; while Fury is both big and seriously difficult to land against, with 19 knockouts in 27 victories.

Fury returned to the ring this year after a more than two-year absence, during which he battled depression and accepted a backdated two-year ban from UK Anti-Doping.

The build-up has been typically loud and brash, which is expected from a pair of fighters who have never tasted defeat in a professional fight.

“Tomorrow is the time. Actions speak louder than words. It’s definitely the most important fight of my career, but it’s not the most difficult. I’ve fought way tougher guys than him (Fury). I’m going to knock him out.”

Fury responded in kind, saying: “I am no challenger for no man. I’m the linear heavyweight champion of the world, the best of the best.”

30-year-old self-proclaimed ‘Gypsy King’ Fury has also described his return to the ring as the greatest comeback ever.

“I don’t remember a bigger comeback ever, someone coming from further away,” he told BBC Sport.

“I don’t believe someone has gone up to 28 stone, lost all that weight, come back. I don’t remember people suffering with all the problems I suffered with. So it ranks up there with the best comebacks of all time.

“The most important thing for me to do on Saturday is have fun. It’s a great part of my life and I’ll look back on it in time and think: do you know what, they were the best days of my life.”

In Nigeria, the fight will be aired by Supersport one on DSTv.