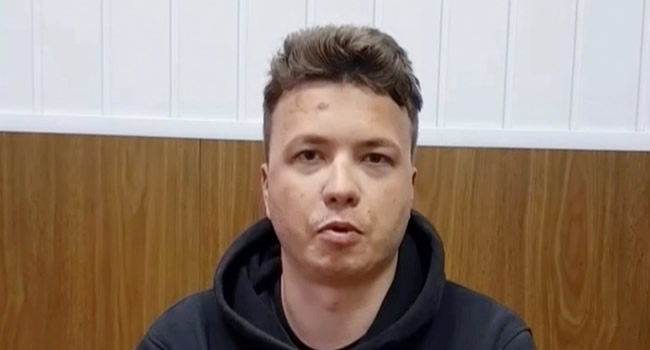 A Belarusian journalist and activist, Roman Protasevich, who was arrested after his plane was forced to land in Minsk, the country’s capital, has appeared on state television where he was full of praises for President Alexander Lukashenko, who was accused of arresting him.

The Ryanair flight FR4978 had been flying from Athens in Greece to Vilnius in Lithuania when it was forced to make an emergency landing in Minsk amid fake reports of an IED on board, and after the forced landing, Protasevich and his Russian girlfriend, Sofia Sapega, were arrested.

Protasevich, who has been in detention since May 23 when he was arrested, made his third appearance on TV on Thursday, looking gaunt and bruised, and tearfully confessed to his role in anti-government protests in the interview which family and campaigners say was conducted under duress.

In the video, Protasevich, the co-founder and former editor of opposition Telegram channel, Nexta, which galvanised anti-government demonstrations, confessed to calling for protests last year and praised the Belarus leader.

Protasevich was heard saying of Lukashenko that ‘in many moments he acted like a man’ with balls of steel ‘despite all the pressure.’

“There were moments where I think the decisions were wrong,” continued Protasevich, before saying that he ‘certainly’ respects Lukashenko when asked if he does by the TV journalist conducting the interview.

At the end of the 1.5-hour interview broadcast by Belarus state-run channel ONT, Protasevich began crying and covered his face with his hands with his wrists appearing to be cut or bruised as he lifted his hands to his face, and throughout the interview, only moved his right arm, leaving his left resting on his knee, leading to much speculation on social media about his treatment.

Reacting to the video, Protasevich’s father, Dmitry, said his son was forced to sing the praises of the man who arrested him as a result of ‘abuse, torture and threats.’

“I know my son very well and I believe that he would never say such things. They broke him and forced him to say what was needed,’ Dmitry said, adding that it pained him to watch the interview.

However, Protasevich said he was giving the interview of his own volition.

‘I’m almost certain they will condemn me publicly, and rallies in support of me will come to naught. But I don’t care what they will be saying. I immediately admitted my guilt in organising massive unauthorized actions.

“I criticized Alexander Lukashenko a lot, but when I became more involved in political topics, I began to understand that he was doing the right thing and I certainly respect him,’ he said in the video.

Related Topics:ActivistArrestBelarusianRoman Protasevich
Up Next