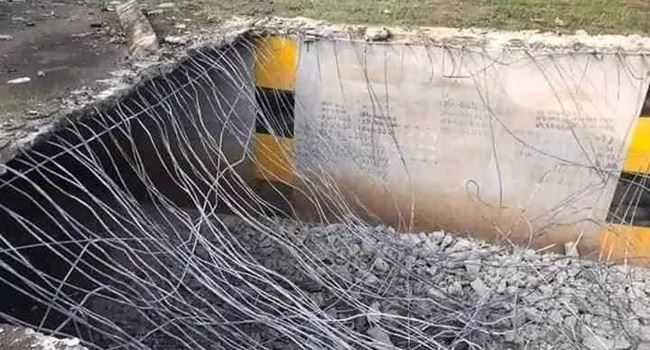 A chieftain of the All Progressives Congress (APC) and a member of its media and publicity group in Imo State, Kelechi Onyema, has applauded the demolition of a tunnel built by the state’s former governor, Rocha Okorocha.

The tunnel, which Onyema referred to as a “death trap”, was recently demolished by Governor Hope Uzodinma-led government of the state.

The state government was said to have demolished the tunnel over its plan to construct a roundabout at the site of the demolished tunnel.

The development has generated mixed reactions among residents in the state. While some had frowned at the demolition, some others felt it was a right step in the right direction.

Responding in a statement on Friday, Onyema, accused Okorocha of allegedly littering Imo with substandard projects during the eight years he governed Imo.

“Okorocha’s Administration apart from being a family affair was notoriously known for all manner of substandard projects ranging from road constructions, public buildings, street infrastructures etc.

“Right from the inception of that tunnel, Imolites never trusted the project and its durability as well as sustainability as it was said to be a death trap especially during the rainy season.

“Cases of flood around the area was the order of the day leading to the breakdown of vehicles around the tunnels thereby endangering the lives of Imo citizens.

“Integrity test conducted by the Council of Registered Engineers of Nigeria (COREN) during the immediate past administration on the tunnels and other infrastructural buildings of the Rochas Okoroacha’s administration showed they were overtly substandard and posed a serious threat to Imolites that ply that route,” he said.

He said that the pulling down of the tunnel was a healthy development, adding that Governor Uzodinma should be applauded “for doing the right thing to safeguard the lives of his citizen’s notwithstanding whose ox is gored.”

Onyema went further to say, “We should commend our working governor and support him in making our dear state the small London of Nigeria. And pay deaf ears to all enemies of the state as the government is geared towards reconstructing, rehabilitating and recovering.”