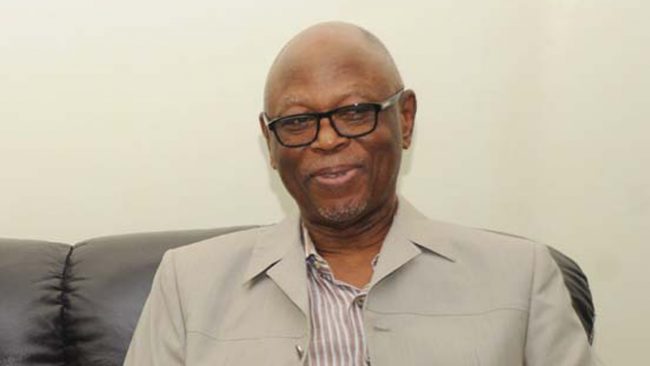 The former national chairman of All Progressive Congress (APC) Chief John Oyegun on Thursday called on all political stakeholders in the country to look towards aborting godfatherism in the political set up as it hinders true democracy in the country.

Oyegun while speaking with newsmen in Abuja on the state of the nation said, politicians need to embrace true and internal democracy that will not betray the trust the masses reposed in them, stressing that the only way to achieve this is to kick-out the embracement of godfatherism in the system.

He called on the party leaders to decide the faith of people by taking a decision on who holds a position at a particular point in time.

“I think the basic problem we have all over is the godfather thing. Internal democracy simply means that if 10 people want to vie for an office, so be it. Let the electorate decide.

“But when party leaders are the ones deciding who is fit or who is not fit, that becomes a problem.

“That is the decision of the electorate. And when they start displacing persons with their friends and another undesirable inducement, that is totally unacceptable. The damage it does is that you are destroying the belief of the electorate in due process. So, it becomes more difficult to accept the result of an election.

“The moment people start believing that they cannot get a fair share, that the system cannot be fair to them, whereas if you painstakingly pursue the process of letting the electorate decide, eventually, you will find out that this going to court will begin to go down. But once you do otherwise, people would have at the back of their minds that they are not fairly treated and would look for every manner of excuse going to court.

“That alone opens up the judicial system and the entire political system to another level and different levels of corruption. “So, the damage is intense and I pray that our politicians will see the need for a proper internal democracy and allow due process and allow the people to thoroughly decide.”

Speaking on the ravaging insecurity in the country, Oyegun said there is a need for President Buhari to take clues from the comment made by what former President Olusegun Obasanjo said recently.

He said the voice of a weighty personality like Obasanjo should not be discounted at a challenging period for the country.

Going further, Oyegun said it will be unfortunate for anybody to pretend that the issue of insecurity in the country is a fluke as the various incidents of kidnapping, banditry and insurgency were too glaring to be dismissed with a wave of the hand.

“Well, I respect him. Every nation needs a man like that just like the people’s SAN, Chief Gani Fawhemi and a lot of activists. What is happening is that because of his status, his experience, his background, what he says becomes infinitely weighty and cannot be ignored. It may be dramatized, but he is addressing an issue that is with us.

“I just told you that this issue of so-called Fulani herdsmen and the copy cats that have followed it has to be addressed.

“So, the issue has to be addressed. I wouldn’t give it the kind of Islamization tag that is given to it, but there is no question at all that it calls for worry because these people exist virtually in every state of the federation and, very soon, it would lead to unpleasantness in all over the country.

“So, the issue has to be addressed and, as I told you that as far as I am concerned, it would be one of the first priority of the next level administration,” Oyegun said.

On the people expected to see in Buhari’s next cabinet, the former APC national chairman implored the president to base his selection on people with good integrity.

“First, they must be people who believe in his vision. Considering the man we have as President, we need thoroughly honest people who share his vision, aspirations for this country and are ready to go all out honestly and diligently to work and bring about the kind of change we are asking for.

“We have adopted the next level, so it must be clear that we are going to move to the next level. The kind of faces that we would be looking forward to seeing faces that when their names are mentioned, the public will say thank God because they see hope, they see competence, they see honesty, they see the passion, they see people who believe in a greater Nigeria, people who believe that we don’t have to be where we are. Those things can be much, much better and things will be much, much better in this second term,” he said.

Against their own, Urhobo group backs Kalu for Deputy Speakership role