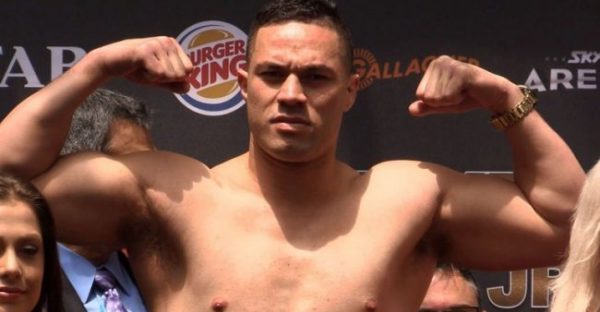 World Boxing Organization (WBO) heavyweight champion, Joseph Parker says he is ready to “go to war” with Anthony Joshua in their unification bout billed for Saturday night in Cardiff.

The 26-year-old New Zealander was speaking during a public workout at St David’s Hall in the midst of over 400 fans.

Parker will be putting his WBO belt on the line against Joshua who holds the International Boxing Federation (IBF) and World Boxing Association (WBA) titles.

“I’m young, hungry, fit and strong. I’ve got my speed back and I’ll show you on Saturday,” Parker said ahead of the fight.

Ann moments before Joshua appeared for his own workout, Parker told the fans: “I’ll see you Saturday, let’s go to war.”

Meanwhile, 28-year-old Joshua, who has Nigerian origin, stated he would maintain a “challenger’s mindset” as he looks to defend his perfect 20 knockouts from 20 fights.

Parker is unbeaten in 24 fights, and will also be hoping to maintain his record.

But whoever wins on Saturday is certain to face undefeated American Deontay Wilder, who holds the fourth belt in the heavyweight division.

​​And no boxer has held all four heavyweight belts simultaneously.