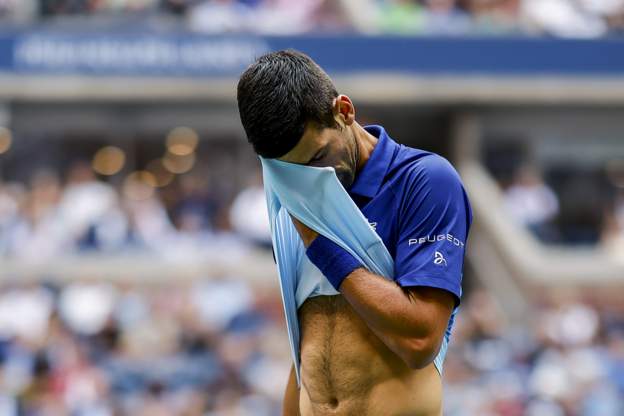 World number one, Novak Djokovic has failed to win the US Open final that should have seen him make a big history in the men’s tennis.

The Serb was on the verge of doing what no man has done for 52 years by winning all four Grand Slam titles in the same calendar year.

He was also on the verge of sealing his 21st Grand Slam title, a step higher than rivals Roger Federer and Rafael Nadal who also have 20 Slams each.

But it was Medvedev’s night, as he won straight sets 6-4 6-4 6-4 to clinch his first-ever Grand Slam title.

The 25-year-old Russian had previously appeared in two Grand Slam finals, losing the US Open 2019 title to Rafael Nadal and February’s Australian Open to Djokovic.

Read Also: Djokovic to treat US Open final against Medvedev like last match of his career

Perhaps burdened by the weight of history, Djokovic looked subdued throughout as he made a high number of uncharacteristic errors and also became tearful towards the end.

“Amazing match, amazing tournament. If there is anyone that deserves a Grand Slam title right now it is you, so well done,” said Djokovic, 34, after the game.

“To your team, you have an amazing team, you are one of the greatest guys on the tour, we get along very well. I wish you many more Grand Slams, many more majors to follow, and I am sure you will be on this stage again in the future.”

Speaking after the game, champion Medvedev apologized to his opponent for stopping him from winning the Calendar Slam.

“First of all, sorry for you the fans and Novak. We all know what he was going for today. What you have achieved this year and throughout your career, for me, I have never said this before, you are the greatest tennis player in the history,” said Medvedev.

Arteta salutes wife, family for standing by him during ‘difficult moment’ at Arsenal