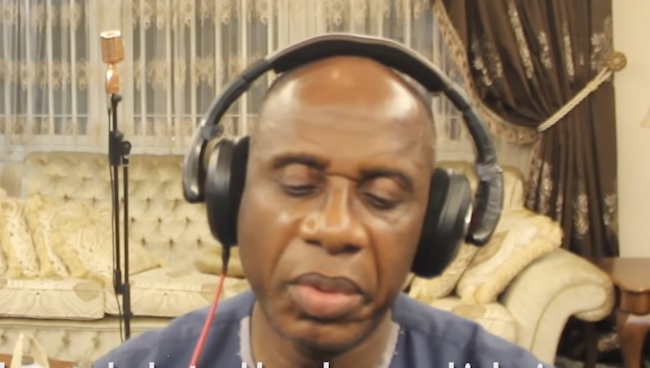 The minister of Transportation, Rotimi Amaechi has released a gospel single with his wife, Judith.

The music video went viral on Friday, May 28.

Produced by Obliblo Music, the single was released in commemoration of his 56th birthday.

Titled ‘Blessed People the Lord Has Chosen as His Heritage’; Amaechi and his wife sing about God’s faithfulness in their family in the song.

Watch the music video below.

Ezenwa Chika Nerita is the new partner of the former minister of Aviation, Femi Fani-Kayode.

This is coming several months after he parted ways with the mother of his four sons, Precious Chikwendu.

The lawyer and politician seems to have found love with the beauty queen, Miss Nerita who was crowned Queen of Aso International 2019/2020.

She is a runway and commercial career model.

The Abia State-born model is a graduate of Economics from ISM Adonai University in Cotonou, Republic of Benin.

Big Brother Naija Lockdown Reunion to kick off in June

The BBNaija Lockdown Reunion show will kick off in June 2021, the date of the program commencement is yet to be specified; however, fans of the well-watched television show have been given a teaser about seeing their favourite reality star’s on television once again.

The highly-anticipated reunion show was announced via Africa Magic’s official Instagram page on Friday, May 28, 2021.

Read the BBNaija Reunion statement below;
“Friends, foes, and their fans finally meet up this June, and we can already taste the drama!

Keep your eyes peeled for the much anticipated #BBNaijaReunion coming to your screens soon!”, the caption reads

The ‘Lockdown’ season produced rapper Laycon as the winner.

Adeherself addresses alleged relationship with comedian, Cute Abiola as he ties the knot in Ogbomosho

Nigerian comedian, Adeherself revealed to her followers in an Instagram post on Friday, May 28 that she was never in a relationship with popular skit maker and content creator, Cute Abiola after videos of his wedding ceremony surfaced online.

Adeherself was called out on Twitter after her supposed fiance, Cute Abiola got married to another woman in Ogbomosho, Oyo State.

The comedian described her affair with Abiola, as ‘Cruise’. In a statement that she published online, she revealed she shared a friendship bond with Abiola and they never had the intention of getting married.

Read what the social media comedian wrote on her Instagram;

lol you guys should calm down now I already said this before that @thecuteabiola and I never dated and we aren’t in a relationship neither am I engaged but because he was mute on it.

People felt there was a relationship so you see 4 I and and @thecuteabiola are good friends and still will be congratulations to you Bro @thecuteabiola.

Despite Adeherself’s claim that she was never in a relationship with Cute Abiola, a cozy video of the content creators from earlier in the year surfaced online.

Celeb Gist carried out an investigation on the respective social media platforms of both socialites and it was discovered that Cute Abiola proposed to Adeherself in December 2020.

However, Adeherself maintained that what they unveiled before the world was a mere ‘cruise’ and it wasn’t real; Cute Abiola has not made a comment about the ongoing conundrum.

Denrele Edun, who is a renowned transvestite has revealed how he was physically assaulted by his relative due to his mixed nationality.

He said the incident on his 20th birthday made him vow never to let anyone kill his happiness again.

“Witch! Bastard! Go back to your country, you poor foreigner with your children. Wretched Oyinbo!”.

The concluding part of his narrative reads;

“Stop what?”
Next thing, the five of them started flogging me. And I mean, with proper masquerade whips…. the ones with branches jutting out!

“I was Angry. Frustrated. Pained.
And I felt like a Coward at that point because I couldn’t fight back. I just stood there willingly as two of them began to push me around.
When they had their fill, they all moved to the house saying they would extend the same treatment to my Mother and Sisters as we weren’t welcome in the Family House.

“That moment I made up my mind;
NOBODY was ever gonna kill my HAPPINESS again!

“I’m Still A Story waiting to be told!”

Mr. Macaroni real name Debo Adebayo has explained that he is prepared to fight against injustice and lay his life down for Nigerians.

In a post shared on the social media platform, Twitter; Macaroni revealed that he is not prepared to stop fighting for equality.

“Anytime I go out and I see Nigerians getting harassed by men in uniform; I stop my car; get down and stand in solidarity.

Please let us develop the attitude of standing up for one another.

The government has failed us. We are all we have“, he wrote.

“I have been touched bro! Physically; mentally, psychologically and in every other way you can imagine!! But here I am still standing! I would rather die fighting than live in fear of people that ought to protect us. If we can look out for one another, the better for all of us“, he added.

Singers, Simi, Adekunle Gold unveil their baby’s face for the first time as she clocks one

10 most influential Nigerian afrobeats artistes of the decade