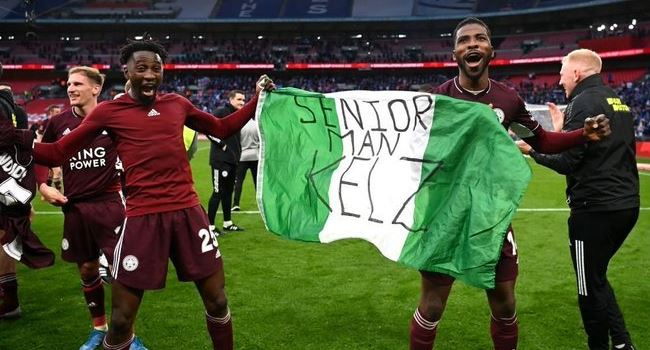 On Saturday, Nigerian players, Wilfred Ndidi and Kelechi Iheanacho inspired their club, Leicester City to a 1-0 victory in the 2021 F.A Cup finals against Chelsea.

The only goal of the game came from Belgian midfielder, Youri Tielemans who struck home from outside the 18-yard box. The goal was enough to see the one-time Premier League winner grab their very first F.A Cup title.

Moments after the game came to a conclusion, the players were seen grooving and jiving in their dressing room. The celebrants were playing the 2011 smash hit, ‘Over the moon’ which was performed by Nigerian artiste, Dr. Sid.

Former Big Brother Naija housemate, Angel alleged that he was assaulted by a chauffeur who rendered service with the ride-hailing platform, Bolt.

According to the reality star, real name, Ifiemi Angel Awotarigha, the driver connived with louts to physically assault him.
He made this allegation on his social media platforms on Saturday, May 15.

The reality star revealed that he ordered a ride from the app, and trouble started after the driver took him to a different location.

“Life in danger please @bolt_nigeria you need to check your drivers before they kill people.

@queendianeogechi was able to get me away in time. @bolt_nigeria you will hear from us soon. #mobaction #bolt #threatolife #angelthebrand #bbn2021,” he captioned the video.

Paul Adefarasin admonishes Nigerians to get a Plan B

Paul Adefarasin, the senior preacher and founder of the church, House On The Rock has admonished his congregation and the Nigerian populace to get a plan B and establish methodologies on how to leave the country.

During his sermon on Sunday, May 11, the Lagos-based pastor told his congregation to save themselves from perilous times by absconding from Nigeria.

He specifically mentioned that he has a plan B and he is prepared to execute it when necessary.

Adefarasin said the situation in the country threatens every human life.

The pastor disclosed that his wife, Pastor Ifeanyi is currently out of Nigeria helping to create their own plan B – an alternative plan to relocate from Nigeria in the case of an eventuality.

Listen to the message below.

Nengi, BBNaija star unveils her achievements at the age of 23

Rebecca Hampson, better known as Nengi has revealed several of her achievements at the age of 23.

The reality star who finished as the second runner-up at the 2020 Big Brother Naija stated that she is proud of herself and everything that she has accumulated in her youth phase.

Ifedayo Olarinde, alias Daddy Freeze has slammed Nigerians who love to romanticize suffering as if it were a competition.

The 45-year-old Nigerian-Romanian veteran broadcaster noted that Nigerians love suffering to the extent that they would win Gold if it was included as a game in the Olympics.

Read also: CELEB GIST: Is Bashir, El-Rufai’s son, getting a divorce? Actor Alex Ekubo walks down the aisle this year, and more…

“It’s so unfortunate that ‘suffering’ is not included in the Olympics…if it were, Nigerians would finally be able to win gold, as we are constantly in competition with other sufferers and always winning hands down“, he wrote on Instagram.

Reno Omokri, a former presidential aide to former President Goodluck Jonathan took to his Twitter handle to lambast the minister of information and Culture, Lai Mohammed following the statement that he made at a press conference.

In a press conference that took place on Tuesday, May 11, Lai Mohammed stated that the government is aware of the hideouts of kidnappers, however, security agencies must thread with caution to desist from civilian casualties.

“One of the most difficult things to do, for a democratically-elected government, is to use the instruments of coercion against its own people.”

“For example, while the nation’s military has superior firepower over the ragtag band of Boko Haram and ISWA, the terrorists most often than not operate among the populace, either in our villages or towns, hence the military, in tackling them, is usually careful to avoid collateral damage.

Reacting to the statement in a string of tweets on Wednesday, Omokri said that the government was not careful with #EndSARS protesters last October when soldiers allegedly opened fire on youths at the Lekki toll gate in Lagos, injuring over 30 protesters and allegedly killing some youths.

“Lai Mohammed says the Buhari government knows where kidnappers are, but are only being ‘careful’. But why was the Buhari administration not careful during #LekkiMassacre, or when they massacred Nigerian Shiites?

Why is their mercy only reserved for kidnappers?

“Lai, why is your government now appealing to bandits and herdsmen? Did you ‘appeal’ to #EndSARS protesters before massacring them, or to the people of Orlu before slaughtering them? The Buhari administration is a useless embarrassment!”

Reno’s comment is coming amidst the prevalent reports of insecurity in the country.

In an Instagram post, Anjorin alleged that Toyin created fake Instagram accounts to bully her and claim that she did not carry the pregnancy herself nor did she give birth in Florida, USA.

Anjorin further said that she has never instigated her fans against Abraham because she is not as jobless and evil as her.

Anjorin also said that Toyin started their beef a long time ago when she referred to her first child as an imbecile.

She added that she does not live a fake life like Toyin does, which is why she has kept her first child off social media despite Toyin’s insults and name-calling.

Canadian rapper, Drake real name Aubrey Graham has been honoured as Billboard’s Artiste of the Decade.

The 34-year-old will be receiving the award at the event which will be taking place at the Microsoft Theater in Los Angeles on Sunday, May 16.

Drake was ranked the best-performing artist of the last 10 years, based on activity on the Billboard Hot 100 songs chart and the Billboard 200 albums tally, as well as social media data and touring revenue from Billboard Boxscore, from December 5, 2009, through September 28, 2019.