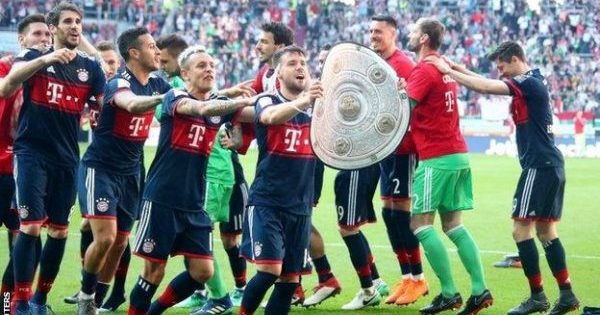 German giants, Bayern Munich came from behind to beat Augsburg 4-1 to wrap up their sixth consecutive Bundesliga title on Saturday.

The Jupp Heynckes’ side won the league with five games left after they picked up the Bavarian derby victory.

Niklas Sule’s own goal put Augsburg ahead in the 18th minute, but goals by Corentin Tolisso and James Rodriguez got the champions on their way towards victory.

In the second half, Arjen Robben converted Rodriguez’s cut-back and Sandro Wagner completed the rout.

Bayern are chasing a treble this season, as they will be hosting Sevilla in Wednesday’s Champions League quarter-final second leg.

Bayern have won the Bundesliga title a total of 28 times.